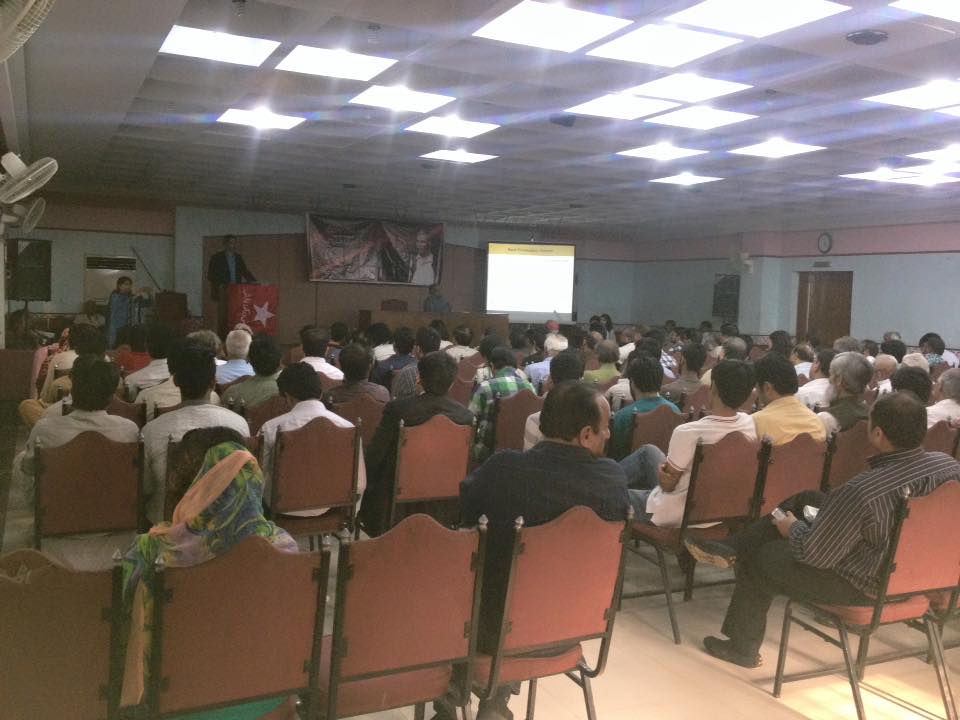 Privatisation in Pakistan
One step forward, two steps back
Dr. Kamal Ahmed Munir, LUMS
“The economy is being strangled while banks are more profitable than ever,” said Dr Kamal Ahmed Munir on Wednesday.
He was addressing the 2nd Annual Jamil Omer Memorial Lecture organised by the Awami Workers Party at Hamdard Hall.
Munir spoke on the government’s privatisation policy for the banking sector, the energy sector and the telecommunications sector.
“In the 1990s, privatisation of banks was rationalised on the basis several assumptions,” he said. “It was believed that banks were not lending much to the private sector, primarily feeding fiscal deficit. Policymakers said banks were not supporting small and medium enterprises. They said the agriculture sector was also suffering because of poor financial support from banks.”
Munir said the 58 per cent tax rate was considered too high. “It was said that this discouraged new entrants from applying for licences.”
He said the level of non-performing loans was almost at 19 per cent in 1993. He said the privatisation of banks was also justified on the basis of low deposit rates.
“Banks were believed to be doing little to mobilise savings,” he said.
Munir said in 2016, the banking sector was dominated by the same banks, except now they were in private hands.
“Deposit rates are still low. The deposits/GDP ratio for Pakistan is 30 per cent as against an average of 65 per cent for emerging markets,” he said.
He said credit for manufacturing and agriculture sector had down and SMEs were still neglected.
This, he said, had happened despite the tax rate being reduced from 56 per cent to 35 per cent.
“Long-term financing for the private sector is almost negligible,” he said.
Munir also spoke on privatisation of the energy sector.
“The 1994 power policy was based on a structure evolved for Hubco. It was universally lauded by private financiers,” he said.
He said the $1.6 billion Hubco Deal for 1,292MW was declared Deal of the Decade by the Euromoney Institutional Investor magazine. He said the deal quickly contracted 19 independent power producers (IPPs).
“Hazel O’Leary, the US energy secretary, said this was the best energy policy in the whole world,” he said.
Munir said the World Bank had provided three justifications for this move from public to private provision of energy. “They hoped that this would deliver wider, better, more reliable service, improve the government’s fiscal position and free up public funds for health and education.”
“They believed that subsidies were not helping the poor since most of them were not connected to the grids in any case. Thus, taking away the subsidies would actually hurt the rich more than the poor,” he said.
He said the deal included separation of generation from its transmission. He said the policy had failed to take into account the fuel used as well as the efficiency of the plant.
“Even inefficient single cycle plants came online. Everyone opted for oil and gas based IPPs as they were the easiest to set-up,” he said.
He said exemption from corporate income tax, customs duties, sales tax and other surcharges on imported equipment encouraged investors to set up mostly oil-based, inefficient (sometimes single cycle) power plants.
“As many as 20 IPPs (including HUBCO) had a combined capacity of 4,500 MW,” he said.
“All of this for a predicted shortfall of 1500 MW!”
He said this had serious implications for WAPDA.
“WAPDA was stuck with massive over-capacity for which it was contractually obligated to pay irrespective of whether it needed those IPPs to produce electricity or not.
He said by the early 2000s, the impact of this had become apparent.
“Industry came to grinding to a halt. Instead of freeing money to be invested in health and education, the government now seems to be coming up with similar policies for these sectors. Cutting subsidies is a favourite solution.”