Addressing the participants, APTUF general secretary Rubina Jameel said, “We are gathered here to protest against the privatization project which the government is bent on going ahead with.” She said over a decade ago the APTUF had denounced the government’s practice of taking loans from the IMF and other international organizations. She said they had predicted back then that the government would sell off state-owned firms to pay off the debts. She said even parties that promised “roti kapra makaan” had kept on taking loans. “Then came the right-wing parties which sought to divide the country along sectarian lines…They created social fissures and deepened the class divide.”

Jamil highlighted the need to unite and fight against the oppressive powers which sought to quash workers’ struggles. “To those who say Pakistan’s trade union movement is dying, we will show them that they are wrong. We need to be committed across the board – the National Board Employees Workers Confederation, the Railway Workshop Union, the All Pakistan Wapda Hydroelectric Workers Union – my comrades, we will get together and raise one voice against privatization.” She said if there was anyone who could save Pakistan it’s the workers of this country. “So we say no to imperialism, no to IMF and World Bank, and no to Privatization!”

AWP general secretary Farooq Tariq said the conference was organized to get together all public sector unions on a platform to strengthen their struggle against privatization. “Privatization only solves problems of the capitalists, not the workers’.” He said Pakistan’s government could learn from the example of Sri Lanka where the proposed privatization of public utilities (electricity) was resisted by workers who suspended electric supply to the entire country for three days.

He said the AWP will support public sector workers in their struggle against privatization. He said the media tends to cover only political parties led by capitalists or Islamists. “It has turned a blind eye towards the problems of the workers.”

APWHWU general secretary Khursheed Ahmed demanded reforms in the public sector enterprises instead of privatization. He said workers have always been committed to their jobs. The dismal state of some PSEs is owed primarily to the distinction between workers and the bureaucracy. He said workers need to be made part of the decision making structures in these enterprises that will solve their problems. He said on April 15 there would be a country-wide protest demonstration against privatization of PSEs.

AWP president Abid Hasan Minto said the Privatization Commission was formed but there wasn’t any consultation with workers who ran the PSEs that are being privatized by the government. “We shouldn’t just limit the struggle against privatization to emotional sloganeering. Privatization represents an ideology under which the government has to be withdrawn and service delivery has to be handed over to the private sector.”
He said the AWP stood against this ideology and would make the government live up to its responsibility towards the people rather than surrendering them to the private sector and international financial institutions. He said the struggle against privatization was not a struggle against a particular political party. “It’s a struggle against the ruling elite of the country which is represented in all mainstream parties and is supported by the civil and military bureaucracy.”

He said the working people needed to become a political force if they wanted to succeed in their struggle against privatization. 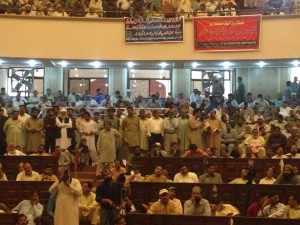 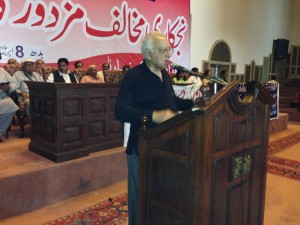 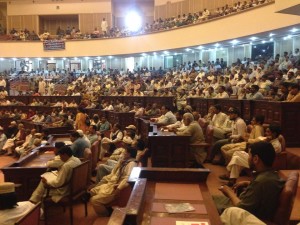