Lahore, 4th Jan 2015: A vigil organized for Salman Taseer by various groups in Lahore was attacked today by armed thugs from the Sunni Tehreek wielding automatic weapons as the vigil was just beginning and the crowd was thin. The police present at the site did nothing to stop the attackers, who also attempted to kidnap some of the protesters. AWP General Secretary Farooq Tariq and member Bashir Zafar were also among the unarmed protesters who got attacked and resisted the assault of the militants. Later on, as more protesters arrived at the vigil, they blocked the road and chanted slogans against the rightwing militants. Comrade Farooq Tariq has led a group of protesters to Liberty thana to register a case against the attackers. 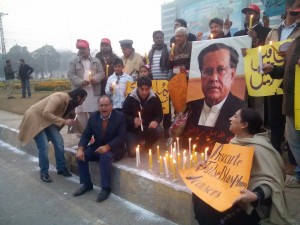 The Awami Workers Party condemns this violent assault on peaceful protesters by right-wing militants and calls for immediate arrest of and action against the culprits. The AWP restates its call for all progressive and nationalist forces in the country to unite under one banner to challenge the brazenly violent forces of reaction and fascism and their supporters in state and society.