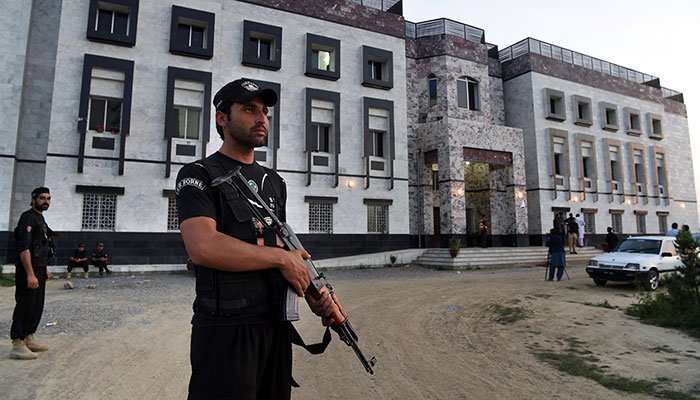 Pakistani policemen stand guard outside the hostel at Abdul Wali Khan university where students beat to death a classmate in Mardan — AFP.

ISLAMABAD: The Awami Workers Party (AWP) condemns in the strongest possible terms lynching of Mashal Khan, a student at the Abdul Wali Khan University Mardan by a mob of fellow students.

The incident is a grim reminder of the rising extremism, fanaticism that have seeped into the Pakistani society so deeply that even university students are now engaging in barbaric mob violence on flimsy and spurious allegations of blasphemy.

AWP President Fanoos Gujjar in a statement here on Friday called for the immediate arrest and prosecution of all those responsible for this heinous crime, including members of the university administration and police officials who failed to stop the cold-blooded murder.

The AWP leader said that he considered this incident a direct consequence of the using allegations of blasphemy by state institutions and the fanatics as a tool to clamp down on dissent views.

In recent months, a frenzied paranoia has been created over blasphemy-related issues by some members of the cabinet and judiciary as well as parliamentarians to portray themselves as ‘protectors’ of the faith.

He also criticized some TV channels and anchorpersons for whipping up the dangerous rhetoric to suppress dissenting voices on the religious extremism and state’s flawed security and foreign policies.

The AWP also considers this incident to be a consequence of the actions of PTI-JI government in Khyber-Pakhtunkhwa, who have been promoting fundamentalism and undermining secular forces in universities in the province since assuming power.

He said that over the past couple of years, the KP government has removed six vice-chancellors appointed by the ANP government in universities. A total of 10 universities in KP, including Abdul Wali Khan University, have been without VCs for the last many months.

Furthermore, the KP government has been filling faculty posts in various departments with religious fundamentalists and patronizing extremist tendencies.

State-endorsed radicalization in the ​KP universities has been accelerated under the PTI-JI coalition, with visibly deadly consequences. The provincial government through the university act has rendered heads of universities powerless in a bid to appoint PTI-JI sympathizers and religious extremists elemnts as VCs and facultiy members.

The social problems underlying this killing go far beyond any one party or group, as is clear from reports that students of multiple parties were involved in the lynching and its justification.

The AWP also expresses concern at the rising campus violence in Punjab and KP instigated by hooligans of IJT, a student wing of Jamaat-i-Islami, against those students who believe in secular values, pluralism and cultural diversity.

The AWP believes that a fundamental transformation of the state and society is the only way to begin to tackle this problem by adopting zero tolerance toward all forms of extremism and bigotry, beginning with decisive punishment for the murderers without any excuses.

He called for ​an end to state-led campaigns against dissent and removal of hate materials from the curriculum.

He also demanded an action against clerics and TV channels for hate preaching and glorifying vigilante murderers.

Fanoos said that the only way to transform state is through the organised political effort and pressure of progressive forces who believe in an equal, just, humane and secular society where religious bigotry is not justified and upheld by the state.

He also called for unity of the progressive forces and unified struggle to prevent the descent of Pakistani society into fanatical self-destruction.