PRESS RELEASE:  October 16, 2016  #AWPCongress
KARACHI: The second federal congress of the Awami Workers Party concluded with a call for peace in the region and social change. The party described the current tension between Pakistan and India as a conspiracy of the ruling class of the two countries and demanded an immediate end to warmongering. The party also supported the Kashmiri struggle for the right to self-determination and condemned violence against the people of the disputed Himalayan territory. These and other demands were made through a set of resolutions passed by the delegates of the congress. 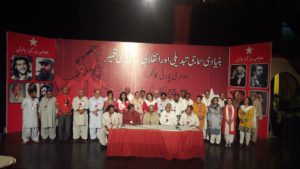 “AWP is a unique party and has been formed in unique circumstances where the country is facing multiple challenges from religious extremism to political stagnation, growing unemployment, poverty and social injustices,” said outgoing president Abid Hassan Minto amidst a standing ovation by the delegates to acknowledge his 65 years struggle for the rights of the working class and untiring efforts for uniting all fragmented progressive forces in Pakistan.

“AWP is an open party in the sense that we want to broaden its organizational presence all over the country to create an atmosphere for struggle for social change following the socialist principles and discipline,” Minto said.

The AWP will continue its efforts for uniting all progressive and secular parties and groups who agree on minimum points of struggle against feudal, tribal and bureaucratic system as well as the establishment. The party will also struggle for breaking the stranglehold of imperialist neocolonial powers and their financial institutions.

He stressed on the party leadership and cadres to understand the party manifesto and program and follow its discipline. He said that the technological revolution has changed many things including the condition of the working class. The party should understand class conflict and complexities of society and educate the people about the party’s program.

Minto’s views were seconded by the incumbent president Fanoos Gujjar who showered tributes on his predecessor for his acumen, wisdom, commitment and contribution to the progressive movement and unity of the Left. He assured the audience that he will follow his predecessor’s principles and strengthen the party and visit all the national units and devise strategy to capitalise on the momentum generated by the outgoing executive committee.

“War is not in the interest of the peoples of India and Pakistan,” Gujjar said. “It will only benefit the establishments of the two countries under multinational corporations and extremist elements. He also criticised those so-called political parties who speak about change but are silent about the plight of workers, peasants, women, and oppressed nationalities.”

He explicitly questioned PTI’s Imran Khan that why he is not talking about the corruption and financial benefits made by religious parties in the name of Afghan and Kashmir Jihad. He said that the class and national question are the cornerstones of AWP. The party will also fight against patriarchy in society as well.

Through a resolution the party opposes religious extremism and terrorism and demands and end to the state patronage of these jihadi outfits. The party also opposes interference of imperialist powers and imposition of war on Iraq, Syria, Yemen and Libya.

The party expressed concern at the growing suspicion and reservations of various nationalities about the China-Pakistan Economic Corridor (CPEC) due to the misplaced priorities and faulty policies of the state institutions. It is the considered opinion of AWP that all international investments, development projects should be executed keeping in view the interests and well being of the working-class and oppressed nationalities. Although it is inevitable to make alternative political and economic arrangements to free the developing countries, including Pakistani, from the stranglehold of imperialist powers and the IFIs, the party demands that entering into any political and economic agreement with any foreign country including China should be made keeping in view the interests of the local population and working class as well as environmental concerns. The party demands that an independent authority comprised of local people should be set up to run the affairs of Gwadar port. The party also demands that CPEC’s southern route should be constructed on priority basis and the concerns of the people of Balochistan and KP should be addressed. The party also demanded extension in and development of Sost Dry Port and handing over of its management to the people of Gilgit-Baltistan. The party also demands that certain hydel, tourism development, education and other projects should be included in the CPEC project to benefit people of Gilgit-Baltistan. Through another resolution the party also demanded that compensation for the land effected by CPEC project should be given to the people of GB as per international law.

Earlier, the delegates elected a 41-member federal committee that elected the federal executive committee of the party for the next 3 years. The congress elected Fanoos Gujjar as its president, Akhtar Hussain as general-secretary, Javed Akhtar as organizing secretary, Yousuf Mustikhan as senior vice-president, Abida Chaudhry as vice-president, Ismat Shahjehan as deputy general-secretary, Farooq Tariq as the party spokesperson, Shazia Khan as finance secretary, Farman Ali as information secretary, Alya Bakhshal as women’s secretary, Safdar Sindhu as labour secretary and Hassan Askari as peasants secretary.
In the open session various progressive and nationalist parties leaders also addressed the delegates of the congress. A cultural program featuring stage play and revolutionary songs were also presented.