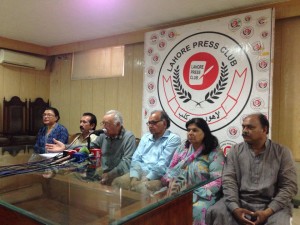 Press Release
31/03/2015
Awami Workers Party rejects sending Pakistani troops or any other aid to support Saudi Arabia
Speakers: AWP President Abid Hasan Minto, AWP General Secretary Farooq Tariq
The civil war within Yemen is not the product of the internal politics of a developing Arab country, but a product of multiple international actors playing havoc with its local politics.
The Yemen issue has fallen prey to the cold war in the Middle East. The US, Saudi Arabia and Iran are amongst the major players in this issue. Saudi Arabia is controlled by one family which is spreading one sect of Islam throughout the world. Iran is controlled by another sect. Both countries are using their oil wealth to gain the favour of other countries in the region.
Saudi Arabia is the close ally of the US while Iran has been considered a foe. The instability in Lebanon, Iraq, Syria, Bahrain and Yemen is a product of this tussle while the US had continued to interfere to promote its imperialist designs.
Pakistan has a critical role due to its large Muslim population and standing armed forces. The internal composition of this population is around 30 percent Shia, 5 percent non-Muslims while the rest are Sunni. The country’s minorities are currently suffering from the effects of a religious militant led war inside its borders. This has massively dented the country’s economic and cultural life.
In these circumstanes, the question arises of whether Pakistan should support Saudi Arabia in the civil war in Yemen. The logic given in favour of this is that Saudi Arabia has always helped Pakistan and it contains the most important religious sites for Muslims. The AWP declares its opposition to any such measures. Its reasons are:
1) There is no threat to major Muslim sites of worship due to the civil war in Yemen, nor is there a direct threat to Saudi Arabia. This means there is no reason to interfere in the matter.
2) The current instability in Yemen is not new. South and North Yemen have had a struggle for the last few decades. Saudi Arabia has interfered in this fight to fulfill its objectives at numerous points. Its interference has not resolved the internal contradictions in the country. Rather it has made the situation worse.
3) Saudi Arabia and Iran are both interfering in the Yemen conflict. It does not suit Pakistan to side with one or the other since one is our neighbor while the other is a regional ally.
4) Pakistan can choose a role of pacifying and resolving the conflict as a mediator.
5) If Pakistan is to join such a war, then the decision needs to be made in a joint session of parliament.
6) The AWP believes that kingdoms, religious governments and other non-democratic governments remind us of the period of barbarism in the 21st century. It is essential to change them for the welfare and rights of the people.