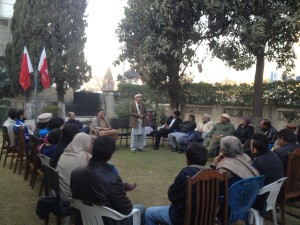 Islamabad, 19th January 2015: The Awami Workers Party held a meeting with trade union representatives from around the twin cities on the weekend to discuss the formation of a prospective anti-privatization alliance. Leaders from various unions, including PTCL, PIA, Railways, PBC, Radio Pakistan, OPF, PWD, OGDC, and Pakistan Workers Confederation attended the meeting, which was chaired by Aasim Sajjad Akhtar (President AWP Punjab). All present unanimously called for the collective struggle against the ongoing privatization process to be taken forward with great urgency.

Speakers at the meeting spoke of recent reports stressed on the immediate need for a concerted campaign to challenge the privatization process, which they said would be accelerated in the coming 4-5 months. In particular, most speakers stressed on the need to mobilize the workers of the public sector institutions that were most under threat, including PIA, Railways, and the remaining shares of PTCL.

Akram Bunda of the All Pakistan Workers Confederation welcomed the AWP’s efforts towards building an alliance of labor against privatization and said they would take this process forward in all other major cities of the country. He said a national level anti-privatization committee was the need of the hour that could coordinate mobilization activities in various cities.

Azad Qadri from PTCL spoke of the massive corruption and tens of thousands of layoffs that surrounded the initial privatization of PTCL 6 years ago and described how the company, workers as well as the national exchequer had suffered as a result. He said that workers from different sectors and industries needed to unite as inter-union labor unity was the only way to stop the large-scale privatization of national assets by the government and its cronies.

Aasim Sajjad Akhtar of the AWP spoke of how disunity in the ranks of organized labor had led to a steady encroachment on worker’s rights that had been ongoing for decades. He said that as long as union leaders continued to engage in compromises bred by personal interests and self-serving affiliations with international non-government organizations, the rights of workers would continue to be trampled upon. He further said that workers would have to commence a process of ‘re-politicization’ and take their struggle beyond just privatization to the exploitative state structures, the ruling elite and their proxies who had made the lives of their countrymen miserable. He said that the AWP was willing to provide a platform for workers of all stripes to organize and commit to the long-term struggle for progressive change.

All representatives present agreed to take the alliance process forward and hold a series of meetings in the twin cities, Lahore, Faisalabad, Multan to consolidate the alliance and launch a large scale mobilization over the coming weeks.