Awami Workers Party has demanded immediate release of its leader Baba Jan and 16 other political prisoners and stop harassment of progressive and nationalist activists in Gilgit-Baltistan.
This and other demands were made during a protest demonstration held outside Lahore Press Club on Thursday against Chief Minister Haafiz Hafeezur Rehman who was addressing the “Meet the Press” programme inside Lahore Press Club. 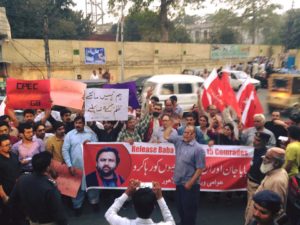 The protesters criticized the CM for his hypocrisy and taking somersault on the issue of political prisoners and his failure in solving people’s economic and other civic problems.
A large number of activists of the AWP, led by the party’s spokesperson Farooq Tariq, and youth from GB assembled outside the press club holding placards inscribed with slogans such as “Teri Jaan Meri Jaan, Baba Jan Baba Jan” “No taxation without representation” “Release Baba Jan and 16 other prisoners of conscience“.
They were also raising slogans criticizing the PML-N regional government for not fulfilling its promise that it will withdraw the FIRs registered against Jan and his 16 comrades on trumped up charges by the PPP govt.
They also assailed the government for launching a fresh wave of crackdown on nationalist activists and filing fake cases against them and demanded its immediate halt.
The protesters condemned the government for ignoring the reservations of the people of GB about China-Pakistan Economic Corridor (CPEC) and demanded that pro-people development projects be included to the project and steps be taken for mitigation of environmental degradation of the region. They opposed levying of tax in the disputed region and demanded withdrawal of Anti-Terrorism Act and other draconian laws from the region, abolition of GB Council and Kashmir Affairs ministry, holding of constituent assembly’s elections and greater internal autonomy for the region.
It is worth noting that CM Rehman had on a number of occasions blamed his predecessor for filing fake cases against Jan and his comrades and during elections campaign in Hunza he promised that he will withdraw the cases and release them. However, after polls he has forgotten his promise.
Jan was recently re-elected as member of the AWP Federal Committee, the highest decision-making body of the party, at its second congress held at Karachi on October 15-16.
He is currently serving a lifetime prison sentence after being convicted by an anti-terrorism court (ATC) of participating in protest against killing of a disaster-hit man and his son by police.
The IDPs were affected by a massive landslide that hit a Hunza village, Attabad, on January 4, 2010, blocking Hunza River leading to the formation of a 23km lake that submerged several villages and left over 1,000 people homeless.
Jan organized the displaced people seeking compensation and their rehabilitation.
On 11 August 2011, some of the displaced families blocked Karakoram Highway (KKH) on which the then Chief Minister Mehdi Shah was due to travel. Police fired teargas and gunshots to disperse the protesters, killing a displaced man and his son, triggering a massive protest in many towns in which a number of government buildings and police stations were torched.
Jan and his 11 other comrades were arrested, tortured and sentenced to life imprisonment in September 2011 under the Anti-Terrorism Act. The Chief Court of the region, however, acquitted them. But the Supreme Appellate Court on May 25, 2015 upheld the ATC verdict, four days before a by-election for Gilgit-Baltistan Legislative Assembly seat in Hunza and subsequently disqualified him to contest polls from jail.
Earlier he contested the polls for GBLA-VI in 2014 and stood second by getting 4,700 votes. The seat was won by the ruling party candidate Ghazanfar Ali Khan. The seat fell vacant when Khan was appointed governor of the region. His son was elected in the by-poll held on Sept 10.
Human rights organizations and prominent intellectuals, writers and parliamentarians of Europe and America, including Prof Noam Chomsky, Tariq Ali and others, Asma Jahangir have demanded Baba Jan’s release.