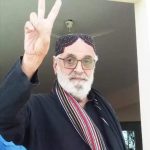 Yousuf Mustikhan was an icon of Baloch nationalism and left-progressive ideals. He spent all of his life embodying the principles for which he stood. His final contribution to the progressive cause was a poignant reminder of his commitments; in June 2022 he presided over the formation of the United Democratic Front (UDF), a broad-based progressive alliance that he believed was the need of the time to counter the growing influence of the military establishment, traditional bourgeois parties, religious right and new age reactionaries like Imran Khan