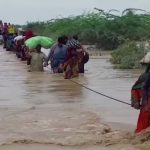 The AWP has called for a mobilisation of public resources and urgent media coverage of the devastation caused by ongoing monsoon-related flooding in Sindh, Balochistan, Khyber-Pakhtunkhwa, Saraiki Waseb, Chitral, Gilgit-Baltistan and Azad Kashmir.
Despite the scale of the destruction being equivalent to the floods of 2010, the AWP has criticised the corporate media and ruling classes for continuing to prioritise palace intrigues and power games due to which lives continue to be lost and precious time and resources squandered that should be dedicated to flood relief. AWP President Yousuf Mustikhan and General Secretary Bakhshal Thalho have said that official figures understate the actual scale of the disaster; thousands have lost their lives while millions have been displaced from their homes and livelihood losses are far beyond any meaningful estimate.