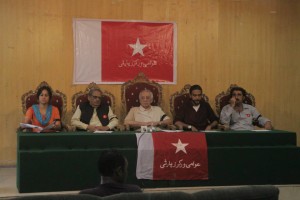 Islamabad, 2nd August, 2015: The Awami Workers Party called for an immediate halt to the ongoing eviction drive of the CDA in Islamabad, an immediate resettlement of all the former residents of the demolished I-11 katchi abadi and demanded that those who carried out the violent, brutal and unlawful operation in I-11 be brought to justice.

These demands were made at a press conference organized by the AWP at the Islamabad Press Club, which was presided over by AWP President and senior Advocate Abid Hassan Minto and also featured AWP Sindh General Secretary Bakhshal Thalho, AWP Islamabad Information Secretary Ammar Rashid and
Alia Amirali of the National Students Federation. The press conference was attended by a large number of AWP party workers and other progressives, all of whom were wearing black armbands in protest against the operation.

Speaking on the occasion, Abid Hassan Minto said that the AWP had already moved the Supreme Court against the I-11 operation, in a petition that included AWP leaders and katchi abadi residents among the petitioners. He said that the petitioners would be seeking an immediate halt to the operation against katchi abadis, as well as compensation and resettlement for the evicted residents, justice for those whose rights had been usurped, as well as an acknowledgement of the responsibility of the state to provide and protect basic shelter and other amenities to all its citizens, as specified in the constitution.

Abid Hassan Minto further said that the manner in which the operation was carried out constituted a fundamental violation of the residents’ inviolable right to life, housing and privacy, and could not be justified under any legal pretext. He said that by evicting the katchi abadi residents in this manner, the authorities had effectively penalized the working poor for being homeless, which constituted nothing less than a crime on the part of the state.

Addressing the press, AWP Sindh secretary Bakhshal Thalho said that the CDA’s action in I-11 had resulted in protests by the AWP in different parts of the country. He said that the brutal operation was a vivid illustration of the kind of brutality that the state had employed for decades in different provinces of the country and was now carrying out in the Capital itself. He said that the AWP would not rest until justice and rightful compensation was provided to those who had been violently displaced. He further said that the AWP would continue the struggle for the basic rights of the urban poor for shelter and other basic amenities would be continued across the country.
Speaking on the occasion, AWP Islamabad information secretary Ammar Rashid said that since the operation, over 66 people including AWP’s Hassan Turi, had been falsely charged under the Anti-Terrorist Act, which was an example of obscene victimization of political protest by authorities to cover up their own crimes. He said that all those arrested must be immediately released and that the AWP would challenge their illegal arrest in court and all other means necessary.

Furthermore, he said that police had refused to register an FIR for the child who was killed as a result of the I-11 operation and was now threatening the father of the child with consequences in case he pursued the FIR. Nearly all the nominated candidates of the AWP had been charged with terrorism by the police, demonstrating a conscious victimization of all those associated with the AWP and a disenfranchisement of people’s democratic rights. He said that this campaign of intimidation demonstrated the criminal manner in which the state was carrying out this campaign. The AWP would continue to expose and challenge all these illegal actions of the authorities through all available means, he said.

Alia Amirali of the National Students Federation (AWP students wing) said that even after the operation, residents were being victimized further by the authorities who were not allowing them to enter Rawalpindi or any other area of Punjab.

Instead they were being told to go to Khyber-Pakhtunkhwa and FATA she said, a clear example of institutional racism against working class Pakhtuns. She said that the immediate priority for the AWP and its allies was the immediate halt to the ongoing operation and an immediate resettlement of all those affected by the operation thus far. She said that the AWP would continue to resist all attempts to illegally evict katchi abadis in Islamabad and continue to fight for the rights of the working poor across the country.