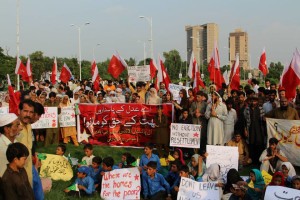 . The protestors were assembled under the banner of the Awami Workers Party and its front the All Pakistan Alliance for Kachi Abadis and included katchi abadi residents from H-11, I-11, I-9, F-11, G-7, G-8, G-6, H-9, F-7, F-6 and Bari Imam, among other informal settlements in the Capital. The protest was also attended by a number of civil society activists and sympathizers who came to express solidarity with the katchi abadi residents. Speakers at the protest called for an end to the ongoing campaign of forced evictions by the CDA and called on the judiciary to listen to the voices of Islamabad’s working poor and recognize their right to housing. The CDA has recently announced its decision to clear 42 ‘illegal’ slums from Islamabad, under the pretext that the residents of these settlements have no legal claim to housing in the city.

Speaking to the protestors, AWP Punjab president Aasim Sajjad said that the Islamabad High Court is set to hear the CDA’s plan on eviction of katchi abadis on Friday morning and we are here to appeal to the court to recognize that uprooting thousands of poor people without offering them any alternative is a violation of their fundamental rights, enshrined both in the constitution and also in the National Housing Policy (2001). He said that the if the highest courts in the land simply ignore the plight of the poor then there is no choice for the latter but to engage in non-violent civil disobedience against selective application of the law.

Speaking on the occasion, Fazal Shah, from the AWP I-11 Unit, said that Islamabad’s working poor had come out on the streets because the city’s authorities had left them with no choice. ‘We have been termed as criminals, terrorists and land mafia simply for the crime of being poor and not being able to afford a decent roof over our heads. We are hard-working Pakistanis who have worked for years to build our homes, but they are always trying to snatch them away from us. Do we not have rights like other citizens of this country?’ He called on the CDA to stop its attempts at forced eviction and speak to the slumdwellers to arrive at a sustainable negotiated settlement.

‘The CDA’s ongoing eviction campaign contradicts our basic right to housing and all laws that deal with katchi abadis’ said Chaudhry James, Katchi Abadi Alliance activist from G-7KatchiAbadi. ‘We have been living in these settlements for decades yet the CDA has been proclaiming that we have only just built these homes. We have ID cards, we have constitutional rights, and we are willing to leave for alternative places if the CDA cannot regularize our homes where they currently stand. Why then are we being threatened with eviction which will leave at least 15,000 families without any shelter?’

Prominent Human Rights Activist Tahira Abdullah also spoke on the occasion and said katchi abadis had come under attack from the authorities all over the country. She said that half of the urban population of the country lived in slums and if katchi abadis didnt exist they would be entirely homeless. She said that instead of forced evictions, the government should be making efforts to regularize the slums and provide basic services to the residents.

Other speakers including Parveen Bibi from Miskeen Colony (G-8), Naeem Masih from France Colony and Sheikh Abdul Rahman from I-9 said that katchi abadi residents have faced evictions many times in the past and always maintained a stance of peaceful resistance and dialogue. They said that the CDA never takes on the rich who encroach on public land, violate zoning regulations and make hay of the law on an almost daily basis but instead continuously targets the poor and defenceless. This is indicative of a political-legal system that actually victimizes those most in need of protection.
Those present to express solidarity with the protestors included PTCL trade union leader Azad Qadri, activists of the National Students Federation and noted progressive intellectuals.