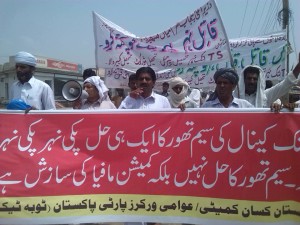 Scores of peasants from villages located on the banks of Trimmu-Sidhnai link canal took out a rally at Pirmahal to oppose the approval of a project under which some nullahs will be constructed along the canal to end waterlogging.

They were demanding to withdraw the decision and to brickline their canal to save their lands forever. The rally was led by farmers action committee president advocate Choudry Shafqat Rasoool and Awami Workers party district president Choudry Muhammad Zubair.

In their speeches the leaders said in a gathering at the end at Allah Hoo chowk, that the chief minister had promised to brickline the canal and the approved project was a conspiracy of the bureaucracy which rejected the proposal of parliamentarians of three tehsels to brickline the canal and instead created a new way which was not applicable and it was in fact a source of money eating project for the bureaucracy.

They said more than 100,000 acres of farmland had been waterlogged and millions of people had been made penniless as a result of non cooperation from government’s end as their farmlands had been ruined due to severe waterlogging and water was flowing into their lands while their houses had developed cracks.

They announced they will not allow the implementation on the so called project and demanded to implement Nespak’s feasibility report under which bricklining had been suggested with the sum of Rs 7 billion.