The Awami Workers Party has finalized its nominations for the Islamabad #LG2015 local government Elections. The party has nominated 30 candidates in 9 Union Councils across the city, in areas where the party has been consistently organizing over the past several years. One third of the AWP’s candidates are women and 8 are religious minorities.

The AWP has sought to nominate candidates from working class backgrounds, who have been actively engaged with the party for years in the struggle for housing and labor rights in Islamabad. The electoral process will be a deeply heated and risky one, as, in nearly all constituencies, the party’s supported candidates are contesting against wealthy candidates, including established career politicians, traders, businessmen, landlords (in Islamabad’s rural areas), and members of the city’s land mafia. The AWP is doing everything in its power to ensure its nominated candidates are given a fair opportunity to compete, building on our support base and the history of our struggle to raise consciousness about the importance of voting for substantive political, social and economic transformation instead of following elite politicians out to further enrich themselves. 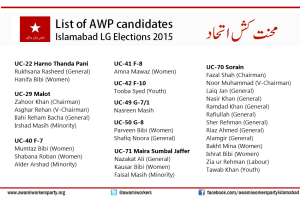