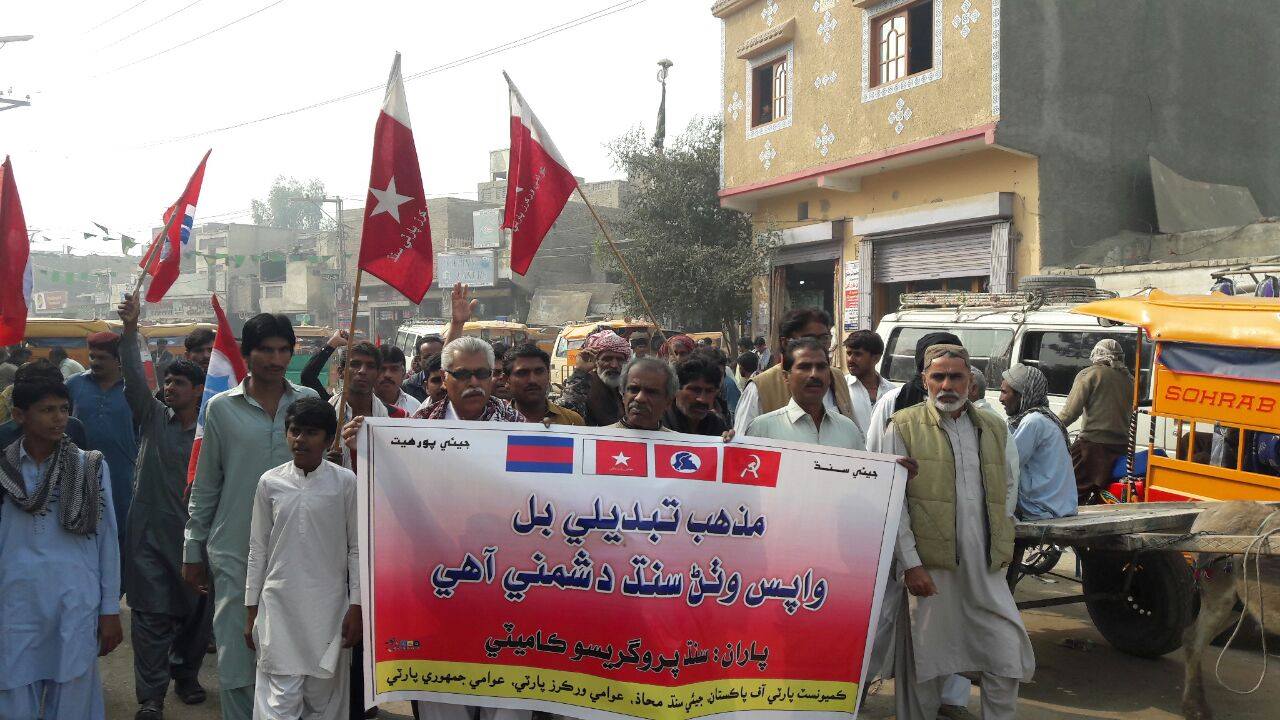 ISLAMABAD: The Awami Workers Party (AWP) calls upon Sindh Government to not reverse the law against forced religious conversions in the province.

According to media reports the Sindh Government has hinted that it may reverse the law enacted by the provincial assembly against forced religious conversions in the province.

“The reversal of the Protection of Minorities Act, 2015 is tantamount to surrender to religious fascist and fundamentalist elements, ” AWP Deputy Secretary-General Ismat Shahjahan said in a statement here on Monday. She said that AWP strongly condemns this shift of the Sindh Government and PPP to once again appease religio-political parties and extremest outfits, and for this time at the cost of rights of oppressed Hindu and Christian communities, and that too rights of  below-18 girls from these communities, who are being abducted, converted to Islam and married off to their kidnappers.
The bill was passed by the Sindh Assembly in November last which drew criticism and mounting pressure from religious extremist groups for its reversal.

The AWP condemns the surrender of the state before the extremist forces which will have dangerous consequences for the non-Muslim and marginalized communities, she said.

She also criticized the PPP which has always acted to the appeasement of right-wing forces. The recent move by the PPP has unmasked its so-called secular and pro-poor stance.

The AWP Deputy Secretary demanded the government to give response to the 17 questions posed by the UN Information Committee about the measures taken on ensuring human rights.

The political expediency and state’s apathy towards religious minorities has led to the growing incidents of kidnapping and forced marriages and conversions of Hindu women and girls in Sindh. According to a 2015 report at least 1,000 girls are forcibly converted to Islam every year through pressure, force, duress or threat, whether physical, emotional or psychological.

To oppose the reversal of or amendment to the Protection of Minorities Act, the AWP Sindh along with Sindh Progressive Committee has already launched a resistance campaign in Sindh.
She called upon all progressive and secular forces to form unity  to raise voices against the pressure tactics of the religious zealots as well as remind the state and parliamentarians that Pakistan is a signatory to several international conventions with clear commitments to protect human rights, especially those of  marginalised sections of society.