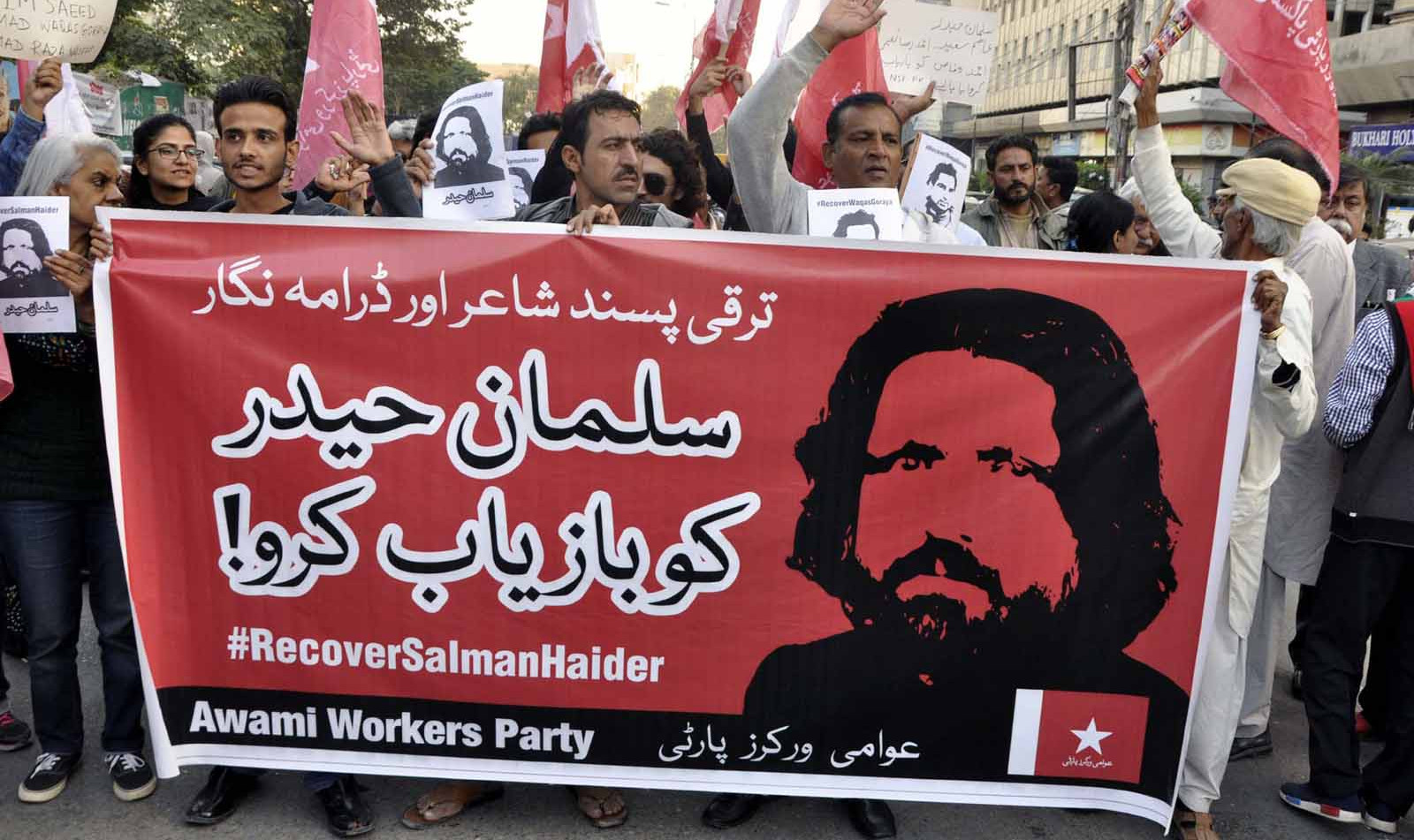 ISLAMABAD: The Awami Workers Party leaders have expressed concern at the non-recovery of progressive rights activists and bloggers.

In a joint statement President Fanoos Gujjar and general-secretary Akhtar Hussain on Tuesday said that despite a lapse of over one week since Dr Salman Haider, a lecturer, poet, and playwright, as well as five other activists, were forcibly disappeared from Islamabad, Lahore, Sheikhupura, the government has failed to trace them.

The AWP also expresses concern at the social media propaganda by right wing extremists against the bloggers and implicating them in false cases.

Salman Haider is a faculty member in the Gender Studies Department at Fatima Jinnah Women’s University and a well-known progressive poet, playwright and activist.

The AWP demands a transparent investigation into the matter and the immediate safe recovery of Salman Haider, Waqas Goraya, Ahmed Raza, Asim Saeed, Samar Abbas and others.

According to media reports the activists and bloggers who have gone missing are known for their progressive and liberal activism critical of the prevailing decadence of society, exploitative socio-political system, religious discourse, and state policies.

The clamping down on progressive forces and literary figures is nothing new. But the enforced disappearances of rights activists and bloggers seems to be the beginning of a disturbing trend showing the rising intolerance and totalitarian policy towards critical thinking, ideas, and speech. It will have dire consequences for the country and society already mired in religious extremism.

“We are also deeply concerned at whipping up of religious sentiments on certain social media pages against these activists. We demand the Cyber crime wing of the FIA to take action against such facebook pages and the pages being run by the banned outfits and sectarian organizations.”

The AWP considers enforced disappearances as the tactics to sow fear among the people and intimidate progressive political activists.

The AWP warns the state apparatus to stop intimidation of progressive and secular forces and expresses its resolve to continue its struggle for a secular, progressive and inclusive society.

The AWP also criticized the interior minister’s statement on sectarian organizations and dilly-dallying on enforcement of NAP.

On the one hand, the state apparatuses are quick enough to muzzle voices of dissent and on the other, the extremist and proscribed organizations and outfits are thriving, roaming freely and preaching hate and intolerance.

The AWP leaders demanded immediate recovery of the activists safely and taking action against the state or non-state elements involved in the abductions of the progressive activists and bloggers.