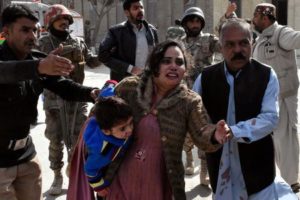 Islamabad, Dec 17 (PR): The Awami Workers Party (AWP) expresses deep sorrow over the loss of eight lives in a twin suicide attack on a church at Quetta reportedly by the Islamic State terrorist group.
According to media reports two suicide bombers attacked Bethel Memorial Methodist Church when Sunday services had just started, exploding a suicide vest and shooting at the Christian worshippers killing at least eight people including two women and wounding up to 45 including five women and two children before one of them blew himself up and police killed the other.
The AWP President Fanoos Gujjar and General Secretary Akhtar Hussain in a joint statement expressed solidarity with the families of those who lost their loved ones as well as those injured in the attack.
They demanded that families of the victims must be provided adequate support for the treatment of the injured and compensation for those killed in the dastardly attack. 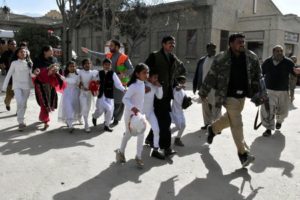 lapse.
They said the security establishment is still pursuing the policy of ‘good’ and ‘bad’ Taliban and demanded a paradigm shift its foreign policy and across-the-board action against all sectarian and jihadi outfits in the province.

The Taliban and sectarian groups linked to al-Qaeda and the Islamic State (IS) group also operate in the strategically important region
They demanded that the government should take control of religious seminaries and purge them of extremism. The state must begin to deprecate itself from the religious affairs.

The two leaders demanded enhanced security at all churches and religious places of all vulnerable communities.