The Women Democratic Front (WDF) will be launched on the occasion of International Women’s Day on March 8 at Islamabad.

This was decided at a meeting of the sub-committee of Women Democratic Front (WDF) held at Lahore on Saturday.

The committee discussed in detail the agenda of how to involve working-class women in political struggle and bring them to the fold of Awami Workers Party and ensure their representation in various offices of the party from federal to basic unit levels.

The meeting also decided to increase women front’s activities and make women issue at the heart of the party programme. 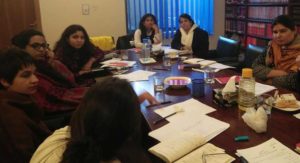 through a resolution condemned the brutal murder after the rape of the six-year-old girl, Zainab Amin, at Kasur and other incidents in Khyber-Pakhtunkhwa and Sindh.

They demanded the government and law enforcement agencies to bring the culprits to justice and take measures to end violence against children and women.

Federal Secretary, women, Alia Bakhshal presided over the meeting. Other members of the sub-co