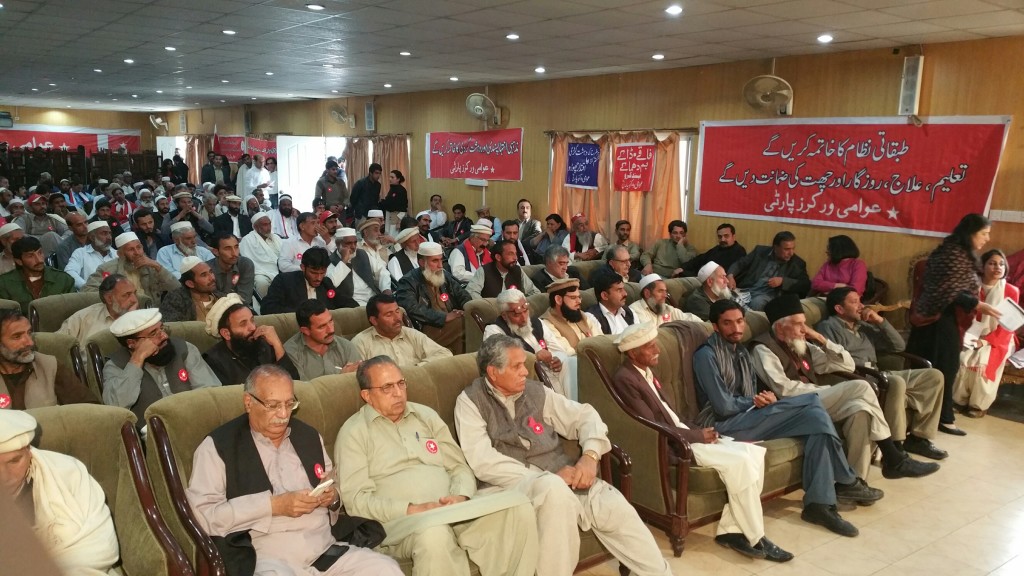 Islamabad, March 20th, 2016: The Awami Workers Party (AWP) has unanimously demanded the Centre and the provinces to accept local governments as third tier of government and ensure genuine and substantive devolution of financial and administrative powers to them so that they could function smoothly and address the common man’s issues at the local level. They also demanded constitutional protection to the LG system and asked the election commission to fill vacant reserved seats in LGs immediately and make them financially and administratively independent.

The speakers said that although local governments have been put in place in Balochistan, Khyber-Pakhtunkhwa, Sindh, Punjab and Islamabad, the ruling elite – including the bureaucracy, military establishment and mainstream parties – are not ready to devolve powers at the grassroots level. They said that the LG laws which were made in haste are replete with ambiguities, flaws and centralist, authoritarian tendencies. They said the Awami Workers Party (AWP), the only representative of working people, labourers, peasants, women, youth, religious minorities, and oppressed nations had taken its struggle into the electoral arena in these elections in hundreds of constituencies in the three provinces and won over 150 local government seats in multiple districts across the country.

Speaking on the occasion, AWP President Abid Hassan Minto congratulated the party’s winning councillors on their success and urged them to use their representative strength to continue their struggle for people’s rights across the country. He said that it was important to remember that electoral victories were not an end for the AWP, but a means to struggle for a socialist society. He said that the AWP would continue its politics of resistance in the political, social, cultural and legal arena alongside its electoral battles. Unless the hold of money over the electoral process in Pakistan is broken, there could never be genuine democracy in the country he said.

Echoing these sentiments, AWP Chairman Fanoos Gujjar said that the dark times we were living in called for progressive forces across the country to join hands in the struggle against obscurantism and authoritarianism. He said that right-wing fundamentalist forces were on the move in the country to protect the feudal, capitalist, patriarchal and authoritarian order and it was the job of forces like the AWP to be counter them to lay the basis for a genuinely egalitarian, secular and socialist order.

The following resolutions were passed at the conference:

AWP demands direct election of the councillors on reserved seats for women, peasants, labourers, religious minorities and youth in Sindh, Punjab, and Balochistan to ensure their genuine representation in the local governments.

AWP demands change in setting the criteria and the definition of qualification of a candidate for worker and peasant seats so that non-peasant and non-labourer candidate could not be elected on these reserved seats.

AWP demands that the Election Commission of Pakistan (ECP) immediately fill the vacant reserved seats in wards, union councils and district councils across the country.

AWP demands that the Punjab government hand over all local subjects including education and health to the local governments.

AWP demands that all development projects of district committees should be approved democratically from the local assemblies and the signature of merely the Nazim or mayor should not be acceptable.

AWP demands that at union council level, all development projects should be executed under the supervision of elected representatives. Currently in Punjab the LG representative have no powers or few limited powers to approve a project.

AWP demands that a law should be made wherein the minimum honorarium of a councillor should be fixed at Rs25,000/- and allocation of substantial fund for smooth working. The government should arrange offices for the local governments.

The speakers highlighted the history of AWP’s formation as a result of the merger of three left wing parties as a continuity of the left politics in Pakistan and its programme for comprehensive social change for which participation in the mainstream electoral process represents only one strategy. The AWP remains committed to the building of a mass movement of resistance through which the anti-people, pro-imperialist system in Pakistan can be totally transformed.