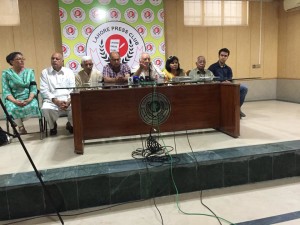 The Awami Workers Party condemns the demolition of the I-11 katchi basti through bulldozers which has made 10000 people homeless. The settlement was at least 35 years old and inhabited by Pakistani citizens. Instead of providing these citizens with alternate accomodation, the government conducted a brutal operation against its working class residents.

The operation shows the inhumane and class-based politics of the ruling class. While the dust has barely settled on the homes of the I-11 inhabitants, the Islamabad administration and CDA has decided to make plans to demolish the rest of Islamabad’s 40 katchi abadis.
Before demolishing the settlement, the government spread the false propaganda that these are terrorists and drug peddlers.

The propaganda said that there were illegal weapons and gangs of illegal Afghans taking shelter. All this propaganda has now been fully exposed as lies. Only stones were thrown by people looking to defend their homes, but no weapons nor terrorists were found in the settlement. The truth is that the residents were vegetable sellers and did small work around the city.

The Awami Workers Party has filed a writ petition in the Supreme Court against the operation. The petition has asked for the homeless to be provided alternate shelter and compensation. There are some fundamental rights guaranteed by the Pakistani constitution. It provides the right to life. Articles 9 and 14 and Articles 37 and 38 protect the rights of the lower classes of society. The higher courts of Pakistan have interpreted the right to life to include the right to shelter, health and work.

The Awami Workers Party (AWP) will not remain silent over the decision to make 10,000 people homeless. Protests were held in different cities, including Lahore. The AWP has now decided to take out a protest all around the country on August 12 to show solidarity with the poor citizens of Islamabad. We will press on the government the urgency to provide the poor with housing and shelter immediately. We will also put pressure on them to stop demolishing katchi abadis in Islamabad and around the country.