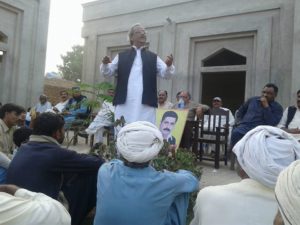 LAHORE: The Awami Workers Party President, Fanoos Goojar, Tuesday visited Okara Military Farms on the last leg of his week-long tour of the Punjab where he extended all out support to the struggle of tenants and brick-kiln workers.

He was accompanied by Mehmood Butt, vice-president, AWP Punjab, and general-secretary Bhatta Mazdoor Union (brick-kiln workers’ union), AWP spokesperson Farooq Tariq and other local leaders.
A large number of peasants including women and children welcomed Comrade Fanoos at Chak 4/4L of Okara Military Farms by chanting revolutionary slogans and expressing their resolve to continue the struggle for their rights.
Addressing a gathering of over 500 men, women and children, the AWP president condemned the police brutalities against tenants, putting their leaders behind the bars without any charges and implicating them in fake cases.
He demanded of the Punjab government to withdraw cases filed against Anjuman Muzareen Punjab leaders on trumped-up charges, and an end to harassment of women and children.
He called for resolving the issue of ownership rights of the tenants amicably through dialogue.
The president assured the tenants that AWP will continue to support their just cause and fight for their rights. He said that it’s AWP’s principle stance that all lands should be confiscated from feudal lords and distributed among the peasants and those who are tilling the lands. 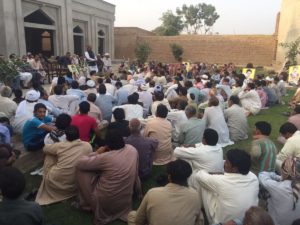 Speaking on the occasion, AWP spokesperson Farooq Tariq said that Mehr Abdus Sattar has been kept in Okara District Jail in chains in violation of Lahore High Court order of unchaining him. He demanded the jail authorities honor the court order and unchain AMP leader. He said that all charges against AMP leaders are baseless and have been proved wrong.
The AMP general-secretary Noor Nabi briefed the AWP president about the coercive tactics being used by the local police against the tenants. He said that despite worst kind of repression, the tenants were determined to continue their struggle for ownership of land.
He also visited the house of jailed APM leader Mehr Abdul Sattar and assured his father and wife that AWP will stand by them and fight his case.

Dera Sehgal
Meanwhile, comrade Fanoos along with Farooq and other leaders earlier on Monday visited the house of Sajida Nawaz at Dera Sehgal and expressed sympathies with her parents on her murder. Sajida, a mother of three and a health worker was murdered by suspected hired assassins at her clinic at Manawa on November 3, apparently for supporting the tenants. 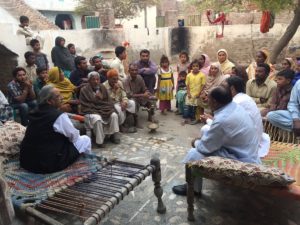 She was the daughter of Sughra Qasim, a peasant woman who along with AWP spokesperson had addressed a press conference in Lahore on November 1, 2016, exposing the collusion of the landlord and the police in victimizing the tenants of Dera Sehgal Village to get the land vacated they are cultivating since 1969.
The local police have registered a case of the incident but not yet arrested any from those who are nominated in the FIR.
The tenants are terrified and living in constant fear. The AWP leaders’ visit to the area was to boost their moral and express solidarity with them and warn the landlord’s gangsters to refrain from harassing the tenants who are struggling for their rights.
The AWP president demanded the Punjab government arrest the killers immediately and free Ghulam Dastgir Mahboob who has been incarcerating in Sheikhupura jail for the last over four years for raising voice for the hapless tenants.
They also met Ghulam Dastgir Mahboob at the Anti-Terrorist and enquired about his health. The jailed leader was in high spirit but very upset with the murder of Sajida. He said that in September, Sajida had filed a petition in the local court stating that she is being threatened by the henchmen of the landlord. The judges had ordered the police to register a case against the suspects but as usual, they did not comply with the order.
Most of the peasant women narrated harrowing stories of harassment and coercion. “We are surviving because of Sajida’s financial and moral support as she was the most educated woman in the village and would spend her income on the needy women.”
They believe that Sajida’s murder is the handiwork of the landlord and continuation of the harassment and coercive tactics being used against the tenants through the police and hired gangsters.
“My father, two brothers, and sister’s husband have been arrested on fake charges to pressurize us to leave the land.”
The president assured the peasants that AWP would continue to support their struggle and lend all out help to them.
There were hardly any woman in the village who’s brother, husband or a close relative is not in jail at present.
The police have arrested 19 peasants on fake charges of robbery and theft and kept in jail for the last one year to pressurize them to vacate the land they have been tilling for the last over 50 years.
The 125 acres land was taken from Sehgal family under the Land Reforms Act in 1972 and given to the tenants. In the 80s the Federal Shariat Court set up by military dictator Ziaul Haq declared land reforms “Un-Islamic”. Taking cue of this verdict, the Sehgal family has been applying all illegal methods to get the land vacated from the tenants.
The landlord has hired a gangster Mehr Shafi who has been using police to register fake cases against the tenants.
One of the AWP leaders, Ghulam Dastagir Mahboob, who went to express solidarity with the tenants, was arrested four years back when the tenants were holding a protest demo and blocked a road. The police in a bid to disperse the tenants opened gunshots in the air and a bullet hit a truck driver. The police implicated Ghulam Dastgir in the murder case of the driver and put him behind bars. he has been incarcerating in Sheikhupura District jail since 2012.
The slain driver’s brother in his statement in the court stated that his brother was killed as a result of the police gunshots not by the peasants.