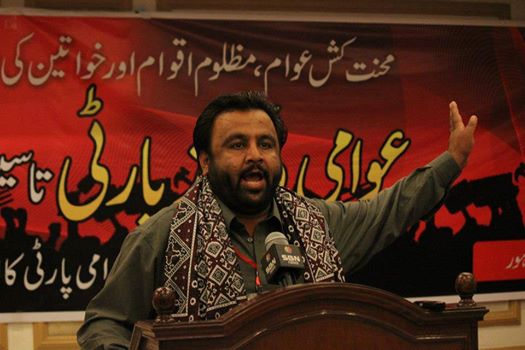 ISLAMABAD: The Awami Workers Party (AWP) has expressed concern at the incarceration of its Federal Committee member Baba Jan and his 15 comrades in jail and demanded the Gilgit-Baltistan Government to release them after withdrawing false and politically-motivated cases against them.

The party through a resolution after its federal committee meeting held in Lahore on Sunday which was presided over the party’s central President Fanoos Gujjar demanded the GB government to make public the judicial inquiry report of the Hunza incident of August 11, 2011 in which a disaster-hit man and his son were shot dead by a police officer during a peaceful protest by the affected people of Attabad disaster seeking compensation and rehabilitation of the displaced people.

The inquiry report had absolved Baba Jan and others from the trumped-up charges registered against them under Anti-terrorism Act (ATA). The meeting also expressed concerns over harassment of nationalist and progressive political activists under the ATA and putting their names on Fourth Schedule list.

The party decided to give a call for a country-wide and international protest on May 23 for the release of Baba Jan and 15 other youths.

The meeting through another resolution condemned the lynching and brutal murder of Mashal Khan, a bright student of Abdul Wali Khan University by a frenzied mob. They expressed dissatisfaction at the investigation of the incident by the Join Investigation Team (JIT) and demanded the Khyber-Pakhtunkhwa government to reconstitute it and arrest the real culprits involved in the gruesome act. The party also expresses concern at the rising religious extremism and misuse of blasphemy laws.

The party demands the government to repeal the blasphemy laws and change the curriculum as well as delink religion from state affairs, security and foreign policies.