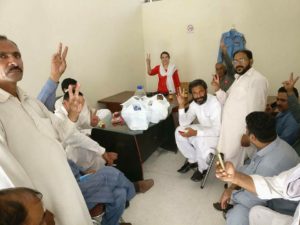 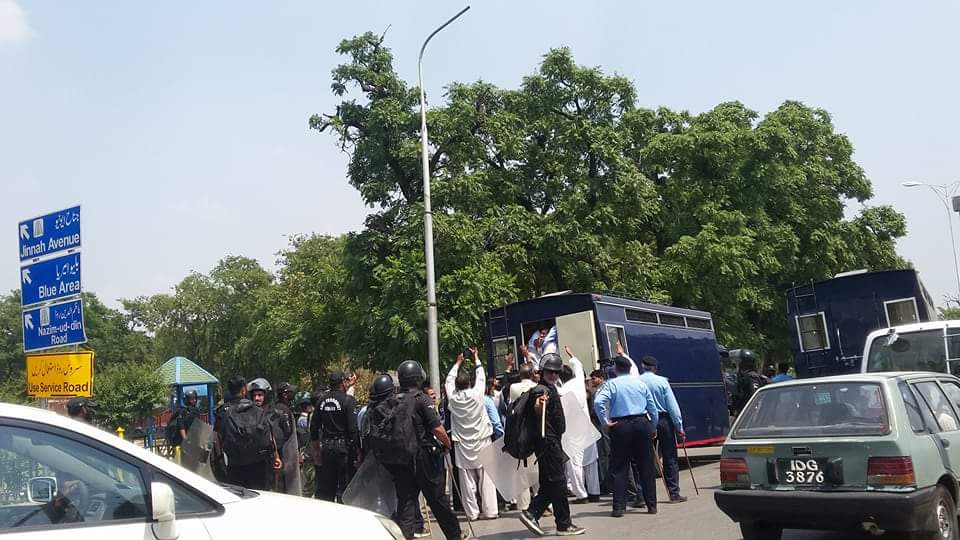 Islamabad, May 18 (PR): The Awami Workers Party (AWP) has condemned the detention of clerks association office-bearers and political activists.

The Islamabad police on Wednesday morning detained over 400 clerks and political activists who had gathered outside National Press Club (NPC). AWP senior leader Prof Shahjehan was also detained who had gathered at the NPC to express solidarity with the clerks. He along with a group of clerks body activists from Bahawalpur, Sialkot and Multan. Have been detained at Ramna police station.

The protesters changed their location from National Press Club to Polyclinic.

The police used baton-charge to disperse the protesting clerks which continued at various locations following the arrest of their activists. The APCA leaders will announce their future line of action at a press conference shortly.

The office-bearers and activists of the All Pakistan Clerks Association (APCA) converged on the capital from all over the country to hold the rally and march from NPC to Parliament House to press their longstanding demands.

“It is unjust and uncalled for to detain clerks who wanted to use their fundamental right of assembling and to organise a peaceful rally,” AWP Deputy Secretary-General Ismat Shahjehan said while criticising the arrest of the clerks.

“The irony of the fact is that the government on the one hand allows banned jihadi and sectarian outfits as well as political parties to organise rallies, protests and sit-ins in the capital and at times facilitates them, on the other hand when working class people raise their voice for their genuine issues, they are subjected to repression and police brutality,” she lamented.

She demanded immediate release of the detained clerks.

Abdullah Safi, general secretary, Balochistan chapter of the APCA and member of the AWP Federal Committee, said that the Islamabad administration was pressurising them to change the venue of the rally but they refused.

“We were planning a peaceful rally to convey our demands to the government. Our demand is to announce at least a 50pc raise in salaries after merging all ad-hoc increments announced since 2010 into our basic salary,” Safi said.

Safi regretted that the ruling class parliamentarians were unanimous in raising their own perks by 200% while they have little interest in increasing salaries of the working class and the white-collar clerks who are the backbone of the government.

“Most of our central leadership has gone into hiding to devise the future line of action in the wake of the arrests. We will decide about the new venue and date of the rally and organise a protest demo if our detained comrades were not released today,” Safi warned.

A heavy contingent of police mostly in plainclothes has besieged the NPC and Polyclinic to foil bids of clerks from entering the premises and organise the rally.

Waqas Malik and Nusrat Hussain of the AWP Islamabad-Rawalpindi District also condemned the arrests of clerks and AWP leader. They demanded the government to release them immediately and accept their demands.