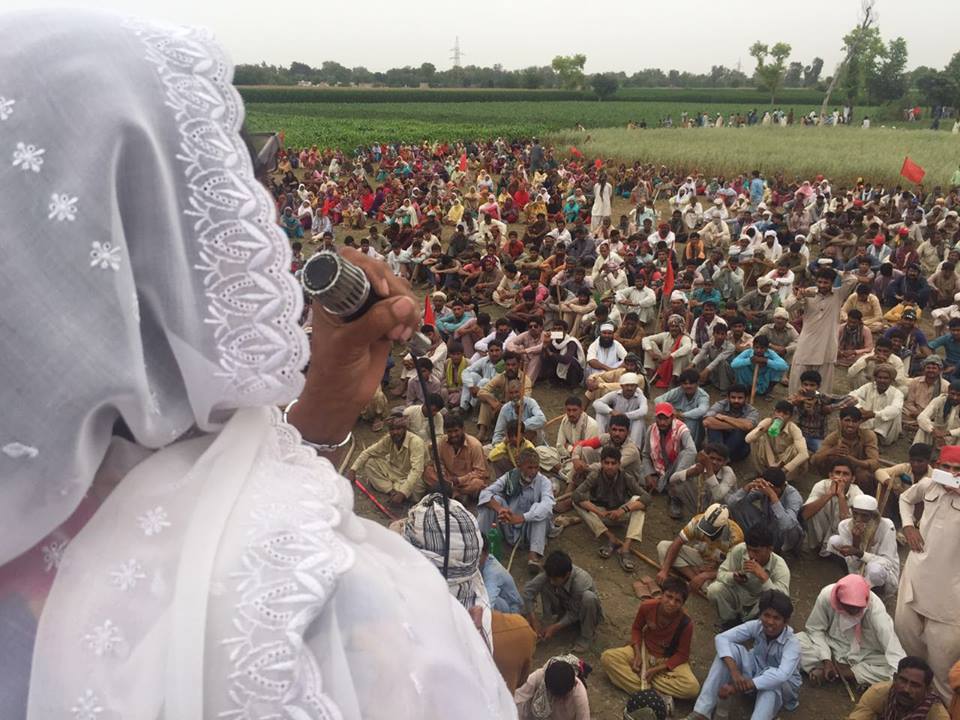 ISLAMABAD: The Awami Workers Party (AWP) Punjab President Asim Sajjad and Deputy secretary-general Alia Amirali, Friday condemned the arrest of the secretary-general of Anjuman  Mazareen Punjab (AMP) Noor Nabi.AMP leader was arrested by security agencies from outside the district council office Okara where he had gone to attend a meeting.

They demanded of the Punjab government to release Noor Nabi and other tenant leaders, withdraw cases filed against them on trumped-up charges and resolve the issue of ownership rights of the tenants through dialogue.

They reiterated AWP support to the tenants’ just cause and said that it’s AWP’s principle stance that all lands should be confiscated from feudal lords and distributed among the peasants.

The AWP appeals to the parliamentarians to take up the unwarranted and unchecked use of force against hapless peasants of military farms who have been struggling to defend their right to land and for dignified livelihood all of which are fundamental rights enshrined in the Constitution of Pakistan.

Background to the peasant movement:

The peasants’ struggle in Okara is part of a larger movement of landless peasants spread over at least nine districts of central Punjab who live/work as tenants on state farms. They have been working on these lands since colonial times during the establishment of canal colonies in the 1900s.

The peasants claim that the land rights granted to them under the Punjab Tenancy Act 1887 at the time of their settlement are being denied by the military farms’ administration. The tenancy act gives the first right of purchase to those who have tilled the land for over 20 years.

The Okara Military Farms, comprising 17,013 acres, were first leased to the British Indian army by the Punjab Government in 1913 for 20 years which was renewed in 1933 only for a period of 5 years. The lease lapsed in 1938. However, the defence ministry under British rule continued to pay rent for these lands till 1943.

Possession of these lands was automatically transferred to Pakistan’s defence ministry after Partition. Since 1943, however, no rent has been paid to the Punjab government by the military farms’ authorities.

In 2000, the military farms’ authorities began a process of shifting the peasants’ status from tenants to contract farmers and forcibly evicted them from the land, which gave rise to insecurity and resistance among them. As a result of which they formed AMP in an attempt to resist evictions and change in their status from tenants to contract workers, and assert ownership rights over the lands they have been tilling for generations.

The military started a crackdown on the peasants in 2002, resulting in a protracted stand-off between the peasants and the military farms’ authorities for almost two years. Heavy contingents of Rangers and police besieged over 18 villages with a population of 100,000 peasants during which water, electricity, and telephone lines were suspended, movement in and out of the villages was stopped, many men and women were arrested, beaten up, and taken to undisclosed locations. At least 8 lives were lost during clashes with tenants.

The troops were withdrawn from the Okara military farms in August 2003, ending the stand-off. But no negotiations with the peasants were held.

The military farms’ authorities and the government have so far been unwilling to recognise the peasants’ rights and refuse to enter into any negotiations with the AMP.

The crackdown on the peasants has begun again, this time by framing “terrorism” cases against the AMP leaders and arresting them one by one over the last few years. The entire leadership of the AMP is now behind bars, along with numerous other peasants associated with the movement.

The Punjab police and security agencies have been conducting raids on villages in Okara military farms since 15 April 2016. Scores of AMP leaders have been arrested, hundreds booked under Section 7 of Anti-Terrorism Act (ATA) for holding peaceful Peasants’ Convention on 17 April 2016.

The AMP general secretary, Mehr Abdul Sattar, was arrested during the raid on 15 April tortured in custody and has now been kept in Sahiwal jail. Other AMP leaders and dozens of other peasants are behind bars, some of them since 2014, on trumped-up charges of “terrorism”.

The AWP Punjab leaders criticised the government and the security apparatus for misusing the National Action Plan and anti-terrorism laws to crush peaceful peasants’ movement rather than for the purpose of fighting terrorism or bringing peace to this war-ravaged country.