Press Release
Criminal negligence by Federal, Sindh governments responsible for loss of lives from heat wave: AWP
Lahore
The Awami Workers Party Lahore on Wednesday held a protest demonstration in front of the Press Club to condemn the federal and Sindh government’s criminal negligence that contributed to the loss of dozens of lives from the ongoing heatwave in Karachi.
The party said death toll from the heat wave had now reportedly crossed 1,000 and there were no signs that further loss could be avoided. It said that the ruling parties could not escape responsibility for the tragedy by explaining it as a natural or unavoidable occurrence. It said the loss of lives was a direct result of the poor governance practices in the past and lamented that the current federal and provincial administrations were continuing with the same practices including privatization of basic public services like water and electricity.
AWP General Secretary Farooq Tariq said the government had sown the seeds of the tragedy decades ago with the transfer of Karachi’s electricity supply infrastructure to a private company. “Water, electricity and other basic amenities are human rights. There is no reason why the state should privatise them,” he said.
AWP Federal Committee member and Lahore general secretary Shazia Khan condemned the dismal performance of the Sindh government in managing the tragedy. She said the Sindh and Karachi city governments had completely failed in managing the rescue and relief efforts. Khan said the public health infrastructure in the city including emergency wards at its major teaching hospitals, ambulance service and mortuaries were unable to cope with the scale of the tragedy. She said the loss of lives had exposed the absolute lack of planning and vision on part of the government high-ups in managing the most populous city in the country.
Later, Khan presented a set of demands from the government and said that it would take up these demands at all forums across the country. The demands were re-nationalization of Karachi Electric Supply Company and an immediate halt on plans for privatization of electricity distribution infrastructure in other cities; provision of potable water to Karachi residents, heat wave cold storages and public health facilities to those suffering from heat-related illnesses on a priority basis and Rs1 million compensation for the families of people who lost their lives.
These demands were also endorsed by students from the Democratic Students Association and the National Students Federation who joined the AWP in the demonstration. 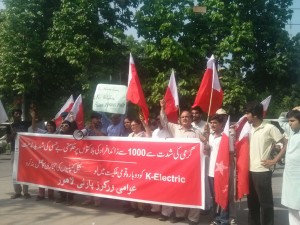