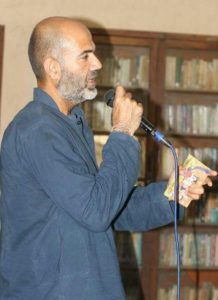 SUKKUR: New rhetorical arguments are made today to justify the hegemonic capitalist development in the face of rising poverty, inequality and conflicts.

Despite the rhetoric about a ‘new era of globalisation’ after the end of the Cold War, the global capitalist order is at least 500 years old, its origin is dating back to the European colonisation of the American continent. The revolutionaries should get united and put up a resistance to the onslaught of the globalization.

This was the crux of the lecture given by noted academic, thinker and activist Dr Asim Sajjad Akhtar, on “The future of world under the influence of globalization” at Mir Masoom Shah Library, Sukkur on Saturday.

The lecture was organised by the AWP Sindh in collaboration with Readers Forum Sukkur.

During his about an hour lecture and the question-answer session, he touched upon various questions about the neoliberal globalization, the driving forces behind it, and who really benefits from globalization, its impact and effects on the livelihood of the working classes, and how to deal with the growing levels of inequality and massive economic insecurity, and how to build mass movements and progressive and radicals forces. 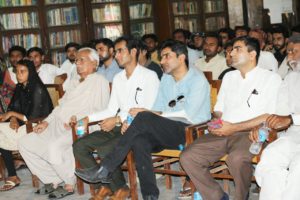 “In each phase of capitalist globalisation, new rhetorical arguments have been constructed to justify and even celebrate capitalist development despite the hunger, deprivation, war and hatred that it has engendered,” the noted writer, columnist, and thinker said.

Discussing the subject in historical perspective, he said it was during the 20th Century that capitalist globalisation faced its biggest challenges, both from anti-colonial movements and revolutionary upheavals inspired by Marxist ideas.
“Yet the communist and anti-colonial challenge could not displace capitalism on a global scale, and with the collapse of Soviet communism, a new phase of capitalist globalisation began, more rapacious and exploitative than ever,” said Dr Asim, who is currently serving as an Assistant Professor at the National Institute of Pakistan Studies of the Quaid-e-Azam University Islamabad.

Today the world is being rapidly transformed by information technologies that signal an unprecedented change in the articulation and discourse of politics, he said.

“These new technologies offer opportunities for new forms of anti-capitalist resistance but remain primarily at the service of state and capital,” Dr Asim Akhtar said, who is a widely read columnist, a member of the AWP Federal Committee and AWP Punjab President.

The corporate capitalist greed for maximization of profit and control over world resources has not only destroyed the world peace, environment and ecosystem but also put the whole planet in danger, Dr Akhtar said, who did his PhD in 2008 from the prestigious School of Oriental and African Studies (SOAS), University of London, at the South Asia Institute on “The Overdeveloping State: The Politics of Common Sense in Pakistan.
He asked the revolutionaries and progressive forces to understand the rapid developments in the global capitalist regime and build a viable communist politics of our age.

The AWP is committed to being at the forefront of this effort, said Dr Akhtar.