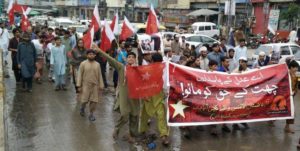 Islamabad, July 31 (PR): Displaced residents of a demolished Katchi Abadi in I-11 Sector, members of the Awami Workers Party (AWP), and representatives of the civil society gathered at the Sabzi mandi, the largest fruit and vegetable market of the twin cities, on Monday, 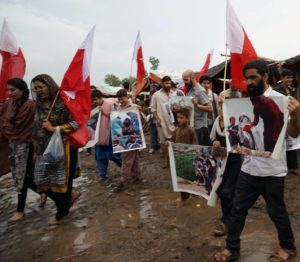 to mark the second anniversary of the destruction of the informal settlement.

The protesters marched in the streets and on the main road of the sabzi mandi raising slogans against the discriminatory and exploitative anti-poor policy of the Capital Development Authority (CDA).

They demanded justice for the people who lost their homes, business and livelihood and who, to date, have not received any compensation from the government.

On July 31st, 2015, the I-11 informal settlement was bulldozed by CDA using the brute police force charging baton and lobbing tear-gas against the hapless people mostly women and children injuring scores of them.

Over 20,000 residents were evicted without being provided alternative resettlement.

The police instituted fake cases against the residents and AWP activists. The court later quashed the cases filed under anti-terrorism laws.

Two years on, they are still waiting for justice for their destroyed homes, businesses, schools and clinics.

al hearing the apex court restrained the civic baboos from demolishing other katchi abadis. There are 48 katchi abadis in the capital with over 100,000 inhabitants. The CDA had planned to demolish all of them.

The SC also directed the federal and provincial governments as well as the federal capital civic agency to come up with a plan to provide shelter and housing units to the low-income people and homeless working class of Pakistan as guaranteed in the Constitution as fundamental rights.

Ironically, no hearing of the case has been held for the last over nine months and no concrete plan has been made by the CDA for the wretched of the earth either. Another case which is related to land reform filed by AWP in the SC has not been fixed for regular hearing for the last five years.

For our superior judiciary and commercial media, those cases are important which can make newspaper headlines and generate political controversy.