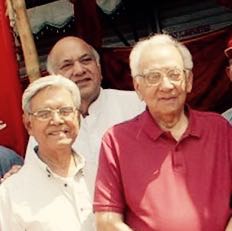 Islamabad, Oct 8: Awami Workers Party senior leader Chaudhry Naeem Shakir Advocate died of cardiac arrest in the US over the weekend. He was 73. He was suffering from prostate cancer and cardiac problem. He leaves behind a wife, son, daughter and a large number of comrades and friends to mourn his death.

AWP leadership expressed their grief and sorrow over the demise of comrade Naeem and termed it a colossal loss to the party, the working class and the marginalized communities for whom he fought throughout his life. They expressed sympathies and solidarity with the bereaved family.

“Naeem stood firm against all odds and pressures from the orthodox religious clergy and ruling elite and struggled for the rights of the poor and marginalized people on legal and political fronts,” Minto said.

He had dedicated his life to the working class politics and contributed immensely towards the efforts in uniting the Left and progressive parties since 1996. He struggled for establishing an egalitarian society, he said.

His commitment to the party and ideology could be gauged from the fact that despite his deteriorating health he was concerned more about the party than his health. A few days ago he called from the America and enquired about the party’s organisational matter and overall political situation of the country, Minto said.

AWP President Fanoos Gujjar and Vice-President Yousaf Mastikhan also termed Naeem’s death a great loss. In Chaudhry’s death the party has lost a great fighter and revolutionary, they said. They urged the party workers and leaders to emulate his struggle. The best way to pay him tribute would be to continue his mission and speed up the struggle against the imperialism, the establishment and ruling elite, the president said.

AWP General Secretary Akhtar Hussain said Chaudhry Naeem Shakir’s death has created a huge void. “His unwavering commitment to the cause of the working class and the Marxist ideology was a source of inspiration for others,” Hussain said adding that the party has lost a great fighter, an intellectual and a visionary.

Despite being a member of the religious minority and oppressed community, he remained committed to the cause of the downtrodden, said AWP Deputy general secretary Ismat Shahjehan in her condolence message.

AWP spokesperson Farooq Tariq said Choudhry Naeem has been a fierce fighter for the rights of the working class politics. “As a lawyer, he would always be available for all of us, all the time on the legal front,” he said.

Chaudhry Naeem’s political struggle spans over half a century. He joined the progressive politics and took part in the working-class movement since his student life and remained committed to their cause and ideal till his last breath.

He was founding member of the AWP and remained a member of its federal committee. Naeem was also deputy general secretary of Pakistan Workers Party.

He was also associated with the Pakistan Trade Union Federation and fought for the rights of labourers and peasants. He defended the hapless members of the religious minorities in fake cases of blasphemy cases such as the Aasia Bibi.

He remained at the forefront during democratic struggles and lawyers against dictatorial regimes and unconstitutional rules.

He was also the editor of the socialist monthly magazine ‘Awami Jamhuriat’ a task he performed with a due diligence which is being published for the last almost 50 years.