pt 17: The Awami Workers Party senior leader Ghulam Dastagir Mahboob has urged the party leadership and cadre to live up to the ideals, remain committed to the cause of the working class, and build the party at the grassroots level.
“We won’t be able to earn the trust of the people and mobilise them for a movement if we do not practice what we preach and the ideology we believe in,” he said while addressing a gathering of the activists and local leaders of AWP and other progressive parties at a reception arranged by the AWP Rawalpindi-Islamabad district chapter for him on Friday.
Earlier he inaugurated a new party office at Satellite Shopping Centre, 6th Road.
He urged the party workers to intensify their struggle for establishing a society free from exploitation of all kinds and offer Pakistan’s working people a viable alternative to the parties of the status quo.
As the mainstream media was busy in creating hype about the frenzied campaigning by the ruling class pa 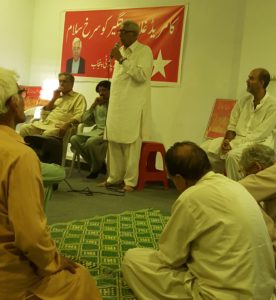 rties –PML-N, PTI and PPP — for the so-called ‘historic’ by-election in NA-120, Lahore, Ghulam Dastagir’s words signify that neither the PML-N nor the PTI wishes to challenge the structure of power that criminalises the poor people and those political forces that seek transformation of both state and society.
The AWP leader, who was freed recently after incarcerating in Sheikhupura jail for five years narrated the episode of his arrest and ordeal in jail under trumped-up anti-terrorist charges for struggling for the rights of tenant farmers of Dera Sehgal estate in Sheikhupura http://www.nakedpunch.com/articles/161.
He said that all over the country, progressives were being victimised by the state under the guise of fighting terrorism, citing examples of Baba Jan in Gilgit-Baltistan and Mehr Abdul Sattar at Okara, while enforced disappearances are on the rise in Sindh, Balochistan with each passing day.
Meanwhile, right-wing militancy continues to deepen its influence in society. Dastagir said that it is only the political left, the AWP in particular, that has consistently drawn attention to the realities of Pakistan’s structure of power and that it is impossible to expect that mainstream parties will ever truly challenge the military-controlled system that prevails in the country.
He also called for a probe into the events that led to the dissolution of the party organisation and the questionable role of some of the local party leaders at Sheikhupura in the Dera Sehgal tenants’ struggle.
“Unless we point out our weaknesses and adopt the inner party accountability through criticism and self-criticism we won’t be able to make the AWP a mass alternative party and dismantle the exploitative system,” he said.
AWP Rawalpindi-Islamabad secretary, education and culture, Professor Yousuf Hassan spoke about the changes in class struc 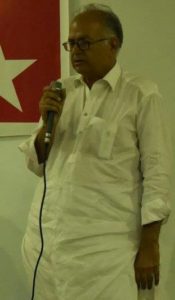 ture in the post-industrial era and the importance of

social transformation of an individual in society from the Marxist perspective. He said that technological development has impacted everything, lifestyle, politics, working class and social relationship.
He said that in Rawalpindi just like other cities, investors make money not by building factories and producing goods but instead developing real estate and generating gains through speculative finance.He asked the party workers to update their ideological knowledge and encourage critical thinking.
AWP Punjab vice-President Professor Salahuddin also spoke on the changes in the mode of production in the agriculture sector, class structure in Punjab and the challenges in organising agriculture workers and peasants.
AWP Punjab Deputy General Secretary Alia Amirali emphasised the need for working among the working women and giving women activists more space in the party and encouraging them to lead the party on different fronts.
“No revolution can be successful without the participation of women in politics,” she said.
AWP Rawalpindi-Islamabad President Chaudhry Masudul Hassan said that while the left continues to struggle against exploitative socio-economic structures and the authoritarian state, we simultaneously have to rehabilitate a culture of ideological politics as even working-class constituencies now are firmly integrated into a patronage-based political system in which ideas and principles are dwarfed by the imperatives of money and power.
He said all cl 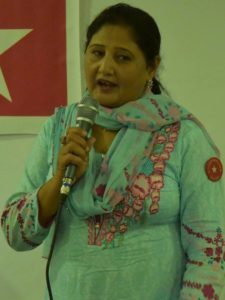 aims of initiating ‘development’ projects aside, the PTI, PML-N, PPP and other mainstream parties are now dominated by speculators and racketeers and all political activities are now mediated through a sub-contracting system where principles and ideology are conspicuous by their absence.
AWP Punjab finance secretary Arif Ayaz spoke about the reasons behind the crisis in trade union movement and the challenges to the party in reviving it and mobilising the workers.
Zarina Arif, AWP Punjab general secretary Ehtesham Akbar, AWP Balochistan general secretary Sabauddin Saba, Iqbal Khan, Jammu and Kashmir Workers Party leader Nisar Shah and Mubarak Ali called for intensifying the struggle against the status quo, rights of oppressed nationalities, rising religious extremism, obscurantism, neo-liberal economic agenda of the imperialist powers.
They also called for building the party, mobilising marginalised communities and workers of the informal sector.