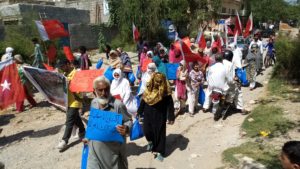 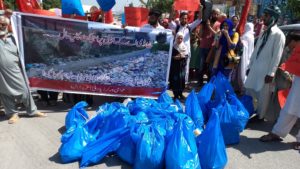 lipur Farash held a protest march against lack of facilities and negligence of the civic agency.
Organised by the Awami Workers Party Rawalpindi-Islamabad, the protesters largely comprised of women and children, who have been suffering due to the CDA’s negligence in providing basic amenities including sanitation facilities to the ‘Model Urban Shelter Project’ blocked Lehtrar Road with piles of garbage and chanted slogans against the Capital Development Authority officials.
Farash Town, located on the outskirts of Islamabad, was declared a model project 20 years ago and many of the residents were relocated from various informal settlements in the capital area.
Containing approximately 4,000 plots spanning over 165 acres, Farash Town is divided into three phases, but their development has remained incomplete for years. Despite having pledged to transform it into a “model town” for the working class, the CDA has failed to provide even basic amenities for its residents.
Roads are poorly developed and riddled with potholes, while the shortage of drinking water and a faulty sewage system have led to outbreaks of diseases such as typhoid in the area. Moreover, the CDA provides no trash collection services, due to which mountains of trash are being piled up outside homes and along streets, increasing the risk of disease.
Rukhsana Rasheed, a resident of Farash Town and organiser of AWP unit, recounted scores of issues faced by the residents due to the CDA’s failure to carry out its duties.
“Now we have no choice but to start throwing our garbage on the main road because that is the only way the CDA will listen to us. We have always cooperated with the CDA, but the fact is that the residents of the model town are facing the same problems as the residents of slums,” she said.
Ms Rasheed added that if the CDA did not start collecting garbage, residents would leave truckloads

of garbage on the road.
Speaking at the protest, Awami Workers Party (AWP) Punjab Deputy General Secretary Alia Amirali criticised the CDA for its negligence and said it should fulfil its obligations to provide citizens with basic facilities, regardless of class.
“It seems that the area was developed without any planning. Even gas and water facilities are not provided to the area. The CDA is not even ready to collect garbage. It seems that the poor are only allowed to live in Islamabad to serve the elite,” she lamented.
Local residents and members of the AWP said they would continue protesting until the CDA sets up a consistent trash collection service for Farah Town. Protesters dispersed peacefully after local administration and police arrived.
Other speakers also echoed the same sentiments and said that ‘Islamabad the beautiful’ has increasingly becoming to resemble an ugly aberration for the majority of the city’s residents who hail from working-class backgrounds and for whom the municipal authorities neither develop facilities nor engage in long-term planning.
They said that it is these working populations that keep Islamabad clean and functioning, yet the CDA’s neglect of these very populations’ needs is completely ignored in the mainstream media and by the intelligentsia, as well as the mainstream political parties who claim to represent the ‘poor’.