KARACHI, Sept 16: A huge public meeting was held at Kathor Village on the outskirts

of Karachi on Saturday against the demolition of ancient villages and 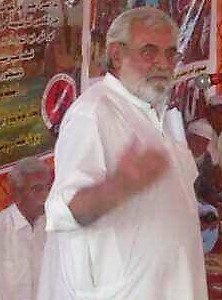 settlements and displacement of indigenous people from their ancestral lands by land grabbers, and real estate mafia.
Speakers criticized the Sindh government and the Karachi administration for their inaction against land grabbers.
They accused the government of patronizing and facilitating the land grabbers and real estates tycoons like Bahria Town and Defence Housing Authority (DHA) trampling the rights of the indigenous people and displacing them from their villages and ancestral lands.

They vowed to resist the land grabbers move to occupy their lands and demolition of historic villages and settlements amid slogans like “Ghairon ki abadkari naa manzoor”, “Sindh Ke Khilaf Saazishain Naamanzoor” (No to settlement of non-locals in Sindh, ‘No to conspiracies against Sindh’ No to Bahria Town, DHA and other land grabbers’.
Speaking on the occasion Awami Workers Party Senior Vice-President Yousufmasti Khan appreciated the local people for supporting the struggle of the Karachi Indigenous Rights Alliance (KIRA). He urged them to get united and struggle against the neo-liberal economic agenda of the capitalist and imperialist powers
“This huge gathering of the people of Kathor proves that they have rejected the so-called capitalist development agenda of occupying lands and resources of the indigenous people,” he said.
“It also shows that they are well aware of the damaging consequences of the settlement of non-locals and rich people under the garb of the development.”
Khan said, “this meeting will send a message to

the people of Sindh and the whole Pakistan that how much we have an attachment with and love for our land, fields and mountains”.
He said that it was the responsibility of the state to safeguard the rights of the people and ensure the provision of basic facilities to the rural people like electricity, gas, education, health, shelter and transportation.
Instead of doing so the state in collusion with influential real estate tycoons is depriving the people of their land.
He said that capitalists and land grabbers are displacing poor people from their lands working class and marginalized communities from katchi abadis in Sindh, Balochistan, Punjab and Islamabad.
He urged them to join hands with the workers and peasants of other provinces to broaden their struggle against the exploitative capitalist and feudal structure and the establishment.
He thanked Dr Hafeez Jamali, Dr Zafar Aslam, Bilal Kuldani, Muhammad Ali Chatha for mobilizing the people and making meeting a success. He also appreciated Waheed Chatha and Yaqoob Chakar for their financial support and for promoting the message of the alliance through social media.