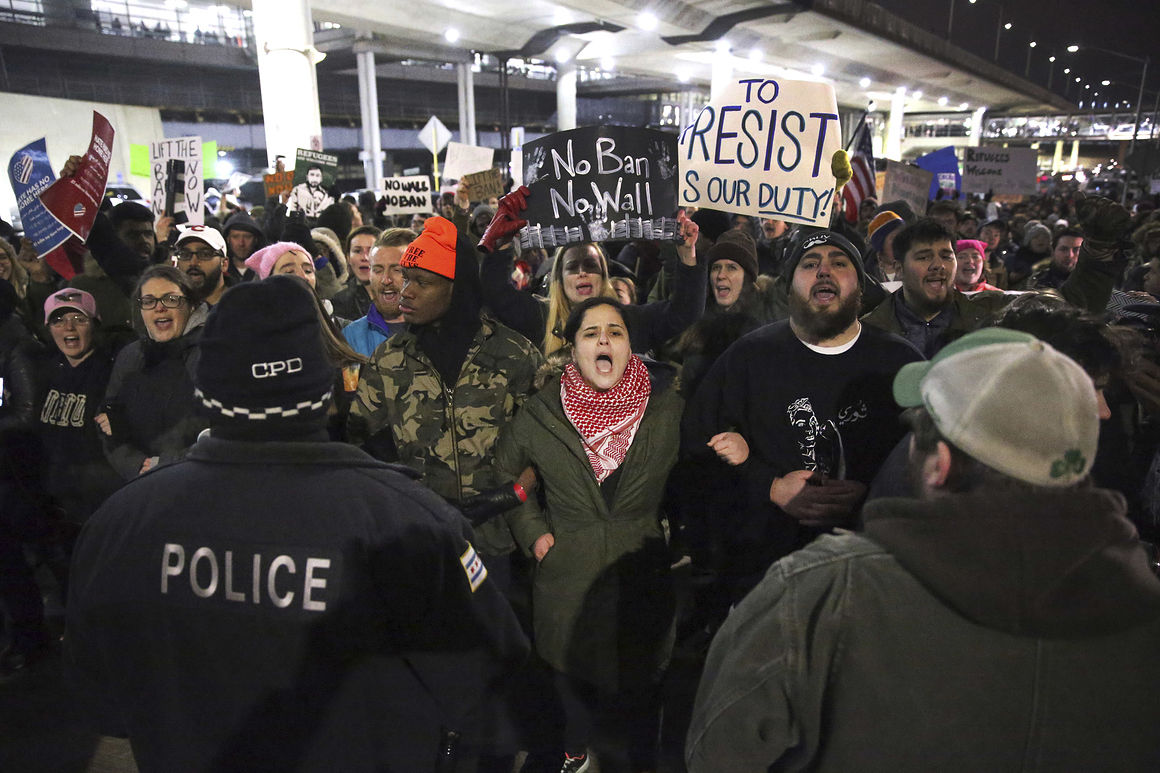 LAHORE: The Awami Workers Party condemns the travel ban on citizens, residents and refugees of 7 Muslim-majority countries instituted by the administration of President Donald Trump. While the ban has been instituted in the name of securing the United States from terrorism, the order is in effect, a collective ban on a particular religious community from those countries – Muslims – including legal residents of the United States, from entering the United States. It is also painfully ironic that the bulk of the countries affected by the ban – including Iraq, Yemen, Syria, and Libya – are those that the US and its allies, including Saudi Arabia, have invaded or bombed in recent years, creating thousands of refugees in the process.

The AWP rejects this ban as a form of obnoxious religious bigotry and stands with those affected as well as the tens of thousands of progressive American protesters who have converged on airports around the country to protest against the detention and deportation of Muslim travelers. Trump’s reckless action plays into the hands of jihadist groups like ISIS whose purpose is to stoke a millenarian civilizational conflict between Muslims and the West, and have already declared their intent to use this as fodder for recruitment propaganda.

However, we must be clear – this is not about a clash of civilizations, but a clash between the forces of reactionary fascism and those of progress and equality across the world. The Presidency of Donald Trump represents a new wave of rightwing fascism that is overtaking countries around the world, from the United States, to France to the Netherlands and Turkey.

As in the 1930s, this fascism is tied to the cyclical failures of capitalism which breeds economic resentment that morphs into violent identity-based nationalisms that seek to demonize and scapegoat religious and racial minorities for economic troubles, while protecting the capitalist elite’s interests, as Trump and his allies are doing. In Pakistan as well, a renewed compact between fundamentalists and state forces is using abductions, religious mobs and violence to silence dissent and assert majoritarian dominance. Pakistan’s treatment and expulsion of Afghan refugees because of a supposed ‘terror threat’ today also smacks of the same mindset that has prompted Trump’s Muslim ban.

As we oppose Trump’s racist, misogynist and hyper-capitalist, policies, it is important to remember that fascists of all stripes always strengthen and reinforce each other, as they strip away the freedoms of those under their power. Islamist jihadists will pretend to oppose the United States’ and Donald Trump’s imperialism, while their violent actions kill and immiserize thousands and strengthen the forces of war and fascism in the United States and Europe at the same time.

Dictators and authoritarians in Muslim-majority and other societies will also pay lip service to opposing Trump while using his example to do away with human rights in their own countries, as many did in the name of ‘fighting terror’ after 9-11.

To truly oppose Trump’s fascism, we must oppose all forms of fascism, fundamentalism and authoritarianism, including those that exist in our societies. We must articulate and bring to fruition a coherent message of progressive resistance to fascism, one that stands against attacks on religious minorities, on women, on sexual minorities, on the poor, on occupied nations and on the climate; one that is based on internationalist solidarity between the oppressed peoples of the world, regardless of religion, nation, race, gender or sexual orientation.

As the fascists of the world build their strength through each other, so must we forge cooperation among those who oppose bigotry and exclusion in all its forms. Only through collective, organized struggle can we achieve liberation and retreat from the disasters that are unfolding around the world.