Islamabad, June 23(PR): The Awami Workers Party (AWP) expresses grief over the loss of precious lives in terrorist attacks in Parachinar and Quetta.
At least 40 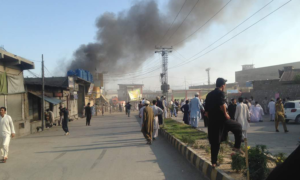 people including seven policemen perished and over a hundred wounded in the twin bomb blasts in Parachinar and Quetta separately on Friday.
The AWP expresses sympathies with the families of those killed as well as injured in the terrorist attacks in the two cities.
According to media reports, at least 25 people have been killed and over 100 injured after two explosions ripped through a densely populated area of Kurram Agency’s Parachinar city Friday evening.
Early in the morning, at least 13 people, including seven policemen, lost their lives, while 19 others were injured in a suicide blast at Shuhada Chowk in Quetta’s Gulistan Road area.
In Parachinar, the first blast occurred at Turi Market near Tal Adda bus terminal where a large number of people were buying food for iftar after participating in an Al-Quds day procession. The second explosion targetted rescuers who rushed to the first blast site.
It was the fourth terrorist attack since January this year and the sixth since 2013 in the Kurram Agency headquarter.
On April 25, at least 10 people, including a woman, were killed and 13 others wounded when their vehicle hit a landmine in Parachinar.
On March 31, the terrorists targetted the city killing 23 people in a car bomb blast near an Imambargah and injuring over 70 others. Another person had died later after security forces opened fire on a crowd trying to hold a protest demonstration in front of the political agent’s office against increasing terrorist attacks in the strategic town.
In January, 25 people were killed and 87 others suffered injuries when a bomb went off at a crowded vegetable market in the city this year.
In December 2015 a similar blast in a market in Parachinar had killed 25 people.
Terrorist attacks in the presence of the heavy army and paramilitary forces and checkpoints on all routes leading to the town and extensive search of visitors and vehicles is a big question mark on the credibility and seriousness of the security apparatus in combating terrorism.
The party demands provision of adequate financial assistance to the families of the victims and for the treatment of the injured.

The AWP expresses concern over the spike in terrorist attacks in recent months in Balochistan and Parachinar despite strict security arrangements and heavy presence of military and paramilitary forces in the two cities.
The AWP feels that the decision of the government to join the Saudi-led military alliance and taking a side in the regional conflicts will be disastrous for the people of Pakistan putting the country in a more precarious situation already embroiled in proxy wars.
This policy must be changed and the political leadership should initiate dialogue with all neighbouring countries to resolve issues and establish friendly relations with Afghanistan, Iran, and India.
Earlier this month, two Navy sailors were killed and five other were injured in separate incidents in the Johan area of Kalat and Jiwani area of Gwadar district.
In May, at least 13 labourers were shot dead in two separate incidents in the same district.
Early this month Chinese nationals were abducted and presumably killed by extremists.
The attacks have disproved the claims by the government and the security apparatus of gains in the war against militancy despite spending over Rs100 million on military operations.
The law enforcement and security agencies have miserably failed to protect the people of Kurram Agency and Quetta from terrorist attacks.
The party feels that there is a need for firm steps and political will to take action against hate preachers, the sympathisers and facilitators of the extremists in the government and state institutions to weed out extremism.
The fleeing of two hardened sectarian extremists in a jailbreak in Karachi and continued fundraising campaign in public places by the banned sectarian and jihadi outfits reinforces the doubts of the people about the government’s political will and security institutions’ credibility in implementing the NAP and combating terrorism.
There is also a need for paradigm shift in national security and foreign policies and a putting in place a coherent and effective strategic approach in National Action Plan and anti-terror operations.
The increasing role of the military in foreign policy, domestic security and governance matters is alarming. The inclusion of armed forces in investigations and accountability of civilian nature and governance and commercial activities is an effort to thwarting the democratic process.
The AWP has been consistently opposing the role of the army in governance and internal security matters. The democratic and progressive forces ought to unite on minimum agenda to strengthen democratic institutions and reclaim the space encroached upon by the military, bring foreign and internal security policies under the domain of the parliament and elected government.