Islamabad (PR) June 15: The Awami Workers Party’s longstanding demand for land reforms echoed in the corridors of parliament on Thursday bringing the issue to the limelight after gathering dust in the superior judiciary.

Veteran socialist politician and constitutional expert Abid Hassan Minto received applaud and appreciation from the legislators for his untiring battle against feudal lords and influential elements who are hindering the enforcement of land reforms and for breaking the power base of landed aristocrats. 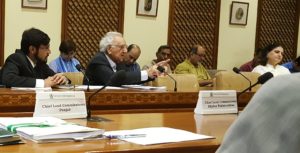 The AWP founding President and Chairman of the party’s Foreign Affairs Committee was invited by the Senate Standing Committee on Information, Broadcasting and National Heritage for a briefing on the petition on land reforms pending for hearing in the Supreme Court for the last five years.

Minto sb very forcefully argued in support of his petition and it’s far-reaching impact on Pakistani politics and society.

He said that the Supreme Court Shariat Appellate Bench verdict nullifying the constitutional provision was an illegal decision and an infringement on the powers of the legislature. The Shariat Bench decision can be set aside by the parliament which has the final power to make amendments to the co

He said that the current socio-economic structure and political system is unfair and discriminatory making the whole democratic system meaningless which serves only the interests of the elite class and denies 98% people of Pakistan of the fundamental right to participate in the democratic process. The current system will remain meaningless unless and until feudal structure and big landholdings by landed aristocrats are abolished.
For this purpose the defunct PWP now AWP had filed two petitions in the Supreme Court in 2012: one on electoral reforms and the other on land reforms, he said.

The apex court immediately gave a verdict on electoral reforms the same year which is still in the process of legislation. But the other petition has not yet been fixed for the hearing, he said.
Four chief justices of the apex court have retired without fulfilling their promises i.e. to fix the petition for hearing.

Former Chief Justice Tassaduq Hussain Jillani had ordered to fix it for hearing on a day-to-day basis but the influential powers that be have been able to delay its hearing.

Even a senior leader of a political party which claims to be striving for a ‘change’ in Pakistan is opposing land reforms and has become a respondent in the case.

It was a major achievement of the party that the upper house of parliament acknowledged the importance of the issue and requested Minto sb to brief them.

All the Senate committee members thanked Minto sb for travelling all the way from Lahore to Islamabad and appraising them about the issue and for his legal and political struggle for the rights of the peasants, workers and working people of the country.

The senators agreed in principle that meaningful land reforms is important for fairness and genuineness of democratic process and social justice.

PPP Senator Taj Haider strongly supported the AWP stance and proposed that a report should be prepared and submitted to the upper house and SC for setting aside the SC Shariat Appellate Bench verdict of 1989 and implanting the land reforms act of 1972 and 1977.
He questioned the Federal Land Commission Chairman to give details of land holdings by influential people including the generals but he said that he had no figures ad data on landholdings.

In another development, Sindh High Court on Thursday restrained the Bahria Town management from carrying out construction on 285 acres lands in Gadap Town on the outskirts of Karachi. AWP Senior Vice-President Yousuf Mastikhan and other activists of the Karachi Indigenous Rights Alliance have been spearheading a movement to save centuries-old Goths (villages) from sharks of real estate business.
The two developments are indeed major achievements of the AWP which is struggling for the rights of the peasants, working class and working people. These developments will boost the party’s image as the only progressive party of the working class.