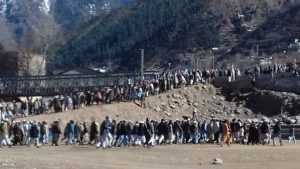 Islamabad (Feb 19): The Awami Workers Party expresses solidarity with the people of Khwaza Khela, Swat, who have come out in protest against the humiliating and often violent treatment meted out to them by security forces at check-posts in the region.

In a joint press statement, AWP Deputy Secretary Ismat Shahjahan and AWP-Pakhtunkhwa President Shahab Khattak on Monday condemned in the strongest terms the demise of a 2-year-old minor boy who died on way to a hospital while waiting in a long queue at a check-post, which has caused resentment and anger among the people of the region.

The AWP leaders also condemned the registration of FIRs against the organisers of a peaceful protest and asked the authorities in Swat to withdraw the charges against the youth immediately. The extreme step by the district administration is an attempt to criminalise protest which is a constitutional and human right of the people. 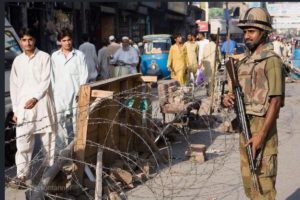 e suspects and colonial subjects in their own land for years. The ordinary people of Swat were not responsible for the spread of extremist jihadist elements in the region. The emergence of extremist elements in the once peaceful tourist spot was an imposition on the society by powerful deep state actors as part of their ill-conceived strategic interests as admitted by the army chief recently in Munich.

“Nor is it the fault of ordinary working class soldiers who are pitted against the local population by their high ups and forced to behave harshly with the civilians as a tactic to keep them ‘under control’”, they said.

“The blame for this sorry state of affairs rests squarely on the officials and elite who make the foreign and security policies,” the AWP leaders said.

The movement of Swat people, particularly after the recent Pasht 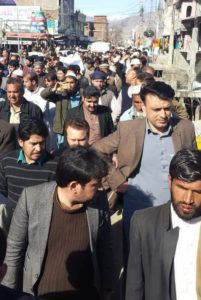 un Long March, should be a wake-up call for Pakistan’s civil and military leadership, that the old policies of strategic depth and use of militancy for achieving foreign policy objectives will not be acceptable to the ordinary people of the region anymore.

For the last many years, ordinary people, particularly in Pakhtunkhwa and FATA, have been suffered immensely as they have been made as cannon fodder for the strategic ambitions of the elite sitting in Rawalpindi and Islamabad, and collectively punished like animals when those strategies blow up.

They demanded that the jihadist elements must be controlled and the sufferings of the working class must end.

“The voices of the youth of FATA and Pakhtunkhwa, who are rejecting both militancy and state violence, must be heeded. Our security and foreign policy strategies must be changed as per the aspirations and demands of the people who have suffered the most as a result of such policies. To continue business as usual and let ordinary people suffer the consequences will no longer be acceptable, as the events of recent weeks have clearly shown.

The two leaders called upon the rulers to understand the gravity of the situation and rectify the situation before it is too late.