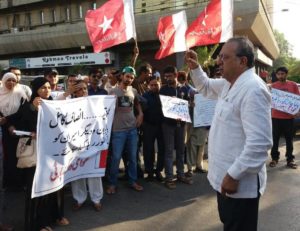 The Supreme Appellate Court (SAC) Gilgit-Baltistan on Thursday adjourned the hearing of the review petition of Comrade Baba Jan against his conviction. The court adjourned the hearing on the request of the advocate general of GB who was not prepared to make arguments on the case.
The next hearing is likely to be held in the first week of July after Eid.
The court referred cases f two convicts to the trial court setting aside their sentence to life term. They were sentenced by the SAC along with Baba Jan and 12 others without trial in the lower courts.

Baba Jan had filed the review petition in the SAC against his conviction in August 2016. The court admitted the petition in October 2016 but fixed no date for its hearing till May 25th, 2017 which had created anxiety and concerns among the people and supporters of the left-wing political leader.

Concerned about the incarceration of Baba Jan and other political prisoners in jail as a result of the delay in hearing of the review plea, the Awami Workers Party had decided to launch a countrywide and international campaign to build a pressure on the GB government, judiciary and Islamabad to release him.

The party had decided to observe ‘Day of Action’ on May 23 two days ahead of the hearing of the case which received tremendous response from party workers, other progressive forces, trade union activists, academics, rights campaigners as well as from abroad. At least 18 left-wing parliamentarians from France, Germany, Ireland, Switzerland, Tunisia, Malaysia and over 400 prominent individuals from 49 countries including Noam Chomsky, Sami Amin and Philippe Pouto, the presidential candidate in the recently held Presidential elections in France, Gilbert Archer and Luciana Genro, a former Senator and presidential candidate in Brazil have signed a petition asking the GB government and Pakistan government to release Baba Jan.

On Tuesday, May 23, the party’s provincial and district chapters organized protest demos, rallies and sit-ins in all major cities of the country including Quetta, Karachi, Lahore, Hyderabad, Larkana, Sanghar, Multan, Sheikhupura, Toba Tek Singh against the illegal detention of political prisoners and demanded withdrawal of cases against them.
No wonder, there was little coverage of the protests in the mainstream media except Sindhi press and Dawn.
The ‘forgotten four’ among many political workers who are in jails for over four years are Baba Jan, Ghulam Dastagir Mahboob, Meher Abdus Sattar and Noor Nabi.
Baba Jan is imprisoned in Gilgit-Baltistan for last five years for supporting the cause of displaced families from Attabad lake area. Ghulam Dastagir Mahboob is in Sheikhupura jail for the last 4 years for supporting the struggle of peasants of Dera Sehgal farms. Meher Abdus Sattar, secretary-general of Anjuman Mazareen Punjab and Noor Nabi, AMP leader and former AWP FC member are also in jail for their struggle for peasants’ rights.
In Islamabad, scores of progressive political workers, students, trade unionists, intellectuals and ordinary citizens gathered at the National Press Club on Wednesday, May 24 to hold a peaceful protest demanding the release of Baba Jan and other political activists who are incarcerating in Gilgit-Baltistan jails. The demo was organised by the Awami Workers Party (AWP) Islamabad-Rawalpindi District chapter.
Speaking on the occasion, AWP leaders including Asim Sajjad, Farman Ali, Prof Shahjehan, Aliya Amirali said that Baba Jan has been in prison for the most part of five years for a crime that he never committed. His actual crime was that he fought for the rights of the oppressed people of GB who continue to be deprived of fundamental constitutional and economic rights for seven decades.

They said that 33-year old young revolutionary had in 2011 demanded compensation for the victims of the Attabad disaster but was wrongfully framed in a case of sedition, and this reflected the deep-seated colonial mindset of Pakistan’s state managers who criminalise any and every democratic demand of GB’s people.

They said that it was ironical that millions of Pakistanis enjoy the mountains of GB as tourists, while much of Pakistan’s water flows down from the same area, yet the people of the region continue to be treated as second-class citizens.
They said that Baba Jan was a symbol of resistance and hero to youth in GB and is quickly acquiring the same status among young progressives in other parts of the country as well.
Baba Jan has proved his commitment to his ideals and to the cause of the working class. We need to get inspiration from his struggle and continue his mission.
They warned the present rulers that so-called developmental schemes such as CPEC would be viewed only as a colonial enterprise until and unless basic political rights and self-determination are granted to GB’s long-suffering people.
Other speakers on the occasion included AWP Rawalpindi-Islamabad general secretary Nusrat Hussain, Noor Muhammed, Daniel Masih, Nisar Shah, Fariha Attique, Amna Mowa’az, Baltistan Youth Forum’s activists Ali Shafa, Alam Noor and Beverg Baloch.
They noted that AWP units all over the country had held peaceful protests to alert the GB Supreme Court Appellate Court that Baba Jan is considered a democratic icon and not the anti-state renegade that the false cases against him imply.
They appealed to the SAC to let common sense prevail and called to halt political victimisation lest more and more young people in GB become alienated from Pakistan as has happened in many other regions of the country such as Balochistan.

AWP Balochistan also organised a separate protest demo outside Quetta Press Club on May 23.
AWP Balochistan Senior Vice-President Abdus Sattar Baloch and Federal Committee member Dr Khalid Humayun spoke on the occasion and demanded the immediate release of Baba Jan and his comrades. Baba Jan and 15 other youth activists have been convicted for life term by the Supreme Appellate Court (SAC) GB.

AWP Karachi chapter organised a protest demo outside Karachi Press Club on Tuesday, May 23. AWP Central Secretary General Akhtar Hussain, Karachi Chapter President Usman Baloch and NSF-GB activist Anayat Baig spoke on the occasion and condemned the GB government for implicating progressive political activists on trumped-up charges.
They asked the GB government to make public the judicial inquiry report of the Hunza incident of August 12, 2011, in which a disaster-hit man and his son were shot dead by a police officer during a peaceful protest by the affected people of Attabad disaster seeking compensation and rehabilitation of the displaced people.
The inquiry report had absolved Baba Jan and others from the trumped-up charges registered against them under Anti-terrorism Act (ATA).
They expressed concerns over harassment of nationalist and progressive political activists under the ATA and putting their names on Fourth Schedule list.
They criticised the state repression on political workers and party’s struggle for the rights of the oppressed people and the working class.

AWP Sanghar organised a protest demo. The rally, led by Mir Hassan Mari, Qayum Landar, Mehboob Khaskheli, Farooq Khaskheli, Shabbir Mari, Bakhsh Mangrio and Behram Shah was held outside Sanghar Press Club. The AWP activists during their speeches slammed the misuse of anti-terrorism laws against progressive political activists and said while some influential people who are facing terrorism charges are roaming freely and travel abroad while political workers are incarcerating in jails for struggling for peasants, downtrodden people.

AWP Hyderabad, Larkana and Naushero Feroz chapters held protest rallies separately for the release of Baba Jan and his 15 comrades.
AWP Sindh President Bakhshal Thalo, Federal Women Secretary Alya Bakshal, Federal Committee member Yunous Raho, Hyderabad District secretary general Sarmad Azad, Latif Leghari led the protest with the members of Naari Jamhoori Mahaz (Women Democratic Front) and AWP activists.
In their speeches they said that throughout the political history of this country, progressive political workers, trade union and student activists have been subjected to worst kind of repression, tortured and imprisoned by the state and security institutions for raising their voices for the rights of the working class, labourers, and oppressed nations.

AWP Lahore organised a protest demo outside Lahore Press Club on Tuesday, May 23. AWP Spokesperson Farooq Tariq, Lahore District general secretary, Shazia Khan, Federal Committee member Abida Choudhry, Labour leader Basher Zafar, artist Imran Nafees, Saliha, poet Shafique Ahmed Shafique and others led the protest demo.
Speaking on the occasion, Shazia Khan said that Baba Jan and his comrades have been imprisoned for organising the disaster-hit people to stand for their rights. Instead of providing shelter and compensation to the affected people of Attabad disaster, the police killed a displaced man and his son and imprisoned their leader.
They urged the Supreme Appellate Court of GB to quash the politically-motivated cases registered against Baba Jan and issue an order for his release. The protesters also demanded the release of Ghulam Dastagir Mahboob, Meher Abdus Sattar and Noor Nabi of AMP.
AWP Toba Tek Singh District organised a sit-in and hunger strike camp for the release of Comrade Baba Jan and his 15 comrades. Comrade Zubair and other local party leaders and activists participated in the sit-in and chanted slogans for the release of Comrade Baba Jan.
In Sheikhupura, AWP local leaders and activists including Safdar Sandhu and others organised a rally for Baba Jan and other comrades.